Belize marks 'end of the world' with commemorative coins 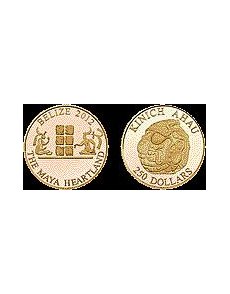 Belize celebrates its Mayan cultural heritage while giving a nod to the widespread popular culture awareness of a supposed “end of the world” scheduled for Dec. 21, 2012, according to at least one interpretation of a Mayan calendar. Two coins, including the Proof .9167 fine gold $250 coin, feature imagery from Mayan culture.

Images courtesy of the Central Bank of Belize.

To borrow from rock band R.E.M., it’s the end of the world as the Mayans know it, and the Central Bank of Belize feels fine.

The bank is commemorating the mythicized “end of the world” that is reported due to occur Dec. 21, 2012, as based on the Mayan “Long Count” calendar, a global popular culture phenomenon that has sprouted from several books and at least two movies during the past five years. The belief has sprung up due to erroneous calculations and interpretations of the 5,126-year-long calendar that ends late this year. Some experts even suggest the calculations could have been wrong for decades and the “end” has already happened or is some distant time off into the future.

The Central Bank of Belize is using the widespread recognition of the Dec. 21, 2012, “prophecy” to issue Proof silver and gold coins to spread awareness of and honor Mayan culture. Belize is host to some of the most important sites of Mayan ruins in Central America.

Both coins, which were struck by Britain’s Royal Mint, feature the same design except for the denominations.

The obverse of the coins displays drawings from the Hokeb Ha vase depicting the hero twins described in the Popol Vuh (Maya sacred book). The hero twins are in conversation, dressed simply in kilts, necklaces, ear flares and white cloth headdresses. The glyphs between the figures of the twins represent the Maya mythicized “End of the World” date.

The reverse of the coins depicts the Jade Head discovered in a large tomb at Altun Ha, a Maya archaeological site. This tomb housed the remains of an elderly adult believed to be an elite ruler during his lifetime.

For the Mayas, jade was the most prized of all stones. “The Jade Head remains the largest single carved object yet discovered in the Mundo Maya (Maya World). This exquisite carving represents the Maya sun god, Kinich Ahau, one of the most important deities of the Maya pantheon,” according to the Central Bank of Belize.

The Jade Head, which became known as the Crown Jewel of Belize, weighs 9.75 pounds, stands almost 6 inches high, and is representative of an era between A.D. 600 and 650.

The gold coin weighs 15.976 grams, measures 28.4 millimeters in diameter and has a mintage limit of 500 pieces.

The silver coin costs $125 and the gold coin $1,100 (both in U.S. funds). Shipping and handling are an additional charge.

Coins can be purchased through the Central Bank of Belize. For more information, write the bank at Gabourel Ln., Belize City, Belize, telephone it at (011) 501-223-6194, email the company at info@centralbank.org.bz or visit it at www.centralbank.org.bz. ¦