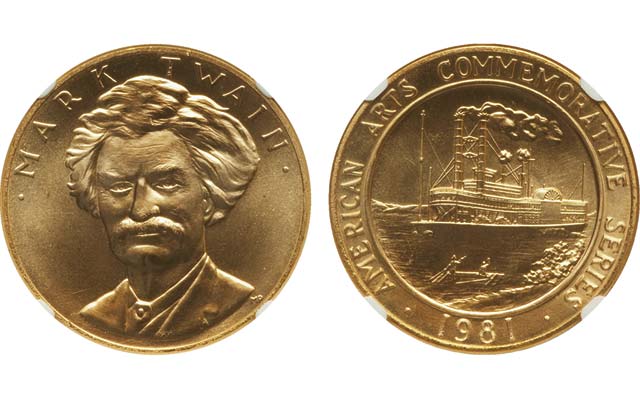 The American Arts Gold Medallions are developing a collector following, decades after they were first issued. Shown is the Mark Twain 1-ounce medal issued in 1981.

American Eagle gold coins, as soon as they were released in October 1986 and for more than two decades since, have been the world’s most popular gold bullion coin. Oft-overlooked is the precursor program, a five-year series of half-ounce and one-ounce gold medals. Struck at the West Point facility from 1980 to 1984, these .900 fine medals were called the American Arts Commemorative Series (AACS), or American Arts Gold Medallions.

One of their primary purposes was to provide an alternative to the South African Krugerrand, then the most popular gold bullion coin in the world.

Already by the mid-1970’s, bullion investors and dealers were concerned about potential marketplace limitations being placed on this coin because of the Comprehensive Anti-Apartheid Act, which imposed sanctions on South Africa. President Ronald Reagan specifically banned the importation of Krugerrands in 1985 (repealed in 1994).

The solution offered by Congress to possible restrictions on the gold trade was a very quirky set of gold medals. Each year, two pieces were issued in half-ounce and 1-ounce formats. The designs feature the head of a renowned American artist, and the reverse made reference to their work.

The American Arts series wasn’t a grand success, although 2 million units were sold in the program.

Dealers openly criticized a kluge purchasing process that required a phone call to the Mint to determine current pricing before purchase, and the awkwardness of a gold medal series that did not initially include any marking of metal weight or country of origin.

By the early 2000s, however, collector interest in the 10 American Arts medals developed. I remember a dealer telling me, “Just try to find a nice Cather,” speaking of the 1981 half-ounce issues, which he believed was the condition-key to the series.

The average grade in the series is Mint State 66, but MS-68 and MS-69 examples can be found. Retail, they trade at a 30 percent to 50 percent premium to their intrinsic metal value. High-grade certified examples command more.

Scott Schechter is a grader at NGC and co-author of 100 Greatest U.S. Modern Coins. He can be reached by email directed to him at scott@ngccoin.com.