Before Olympics start, Royal Mint ready to 'hand over' to 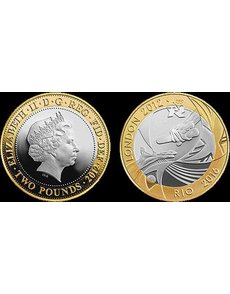 The closing ceremony for the London 2012 Olympic Games will mark the final milestone in the Royal Mint’s landmark commemorative coin program for the event, with the release of four different ringed-bimetallic £2 coins, including the Proof gold version, top, and a silver version with gold plating, bottom.

As soon as the 2012 London Olympic Games close, the Royal Mint in Britain will begin delivering what it promises are the “final coins of London 2012.”

The Handover to Rio £2 coins will close out what has been a record commemorative coin program that, in the most liberal tally, measures 150 different coins available to collectors. That number will hold only if the Royal Mint issues no more coins before or during the Games.

The world will be watching as London hands over the mantle to next host, Rio de Janeiro, during the closing of the 2012 Games on Aug. 12.

The Handover coins were announced and went on sale July 16, 12 days before the opening ceremony.

Four different versions of the Handover coin will be issued:

? A Brilliant Uncirculated ringed-bimetallic piece with a copper-nickel center surrounded by a nickel-brass ring.

? A Proof ringed-bimetallic .9167 fine gold version, composed of a core of “yellow gold” and a ring of “red gold.”

A circulating version will not be issued, according to a Royal Mint spokesperson.

All of the coins feature a reverse by designer and silversmith Jonathan Olliffe. (His designs were also selected for Aquatics and Gymnastics pieces in the contest for 29 50-pence circulating coins.)

The reverse shows a baton being passed from one hand to another, accompanied by the conjoined Union (United Kingdom) and Brazilian flags. The reverse design is set against the background of a running track motif, with the London 2012 logo above and the surrounding inscription LONDON 2012 RIO 2016.

The hands are embraced by a continuous sweeping pennant. One portion of the pennant is the flag of the United Kingdom, which sweeps down and twists to reveal the flag of Brazil. The pennant is on a continuous journey, symbolizing the Olympic movement from London to Rio and beyond, and as it twists and turns, five stripes are revealed, representing the five Olympic rings. The movement “suggests energy, excitement and an overall sense of celebration in anticipation of the Olympic Games in Rio de Janeiro,” according to the Royal Mint.

An incuse edge inscription on the BU and Proof silver coins reads I CALL UPON THE YOUTH OF THE WORLD, a formula traditionally part of the closing speech of each Olympiad. The edge of the gold coin is plain.

All four coins measure 28.4 millimeters in diameter, and both the regular silver and copper-nickel coins weigh 12 grams. The piedfort silver coin weighs 24 grams, and the gold coin weighs 15.976 grams.

The BU coin (which has an unlimited mintage) is packaged with a presentation folder having facts about the closing ceremony and is priced at £9.99.

The Proof gold coin is housed in a wood-veneer presentation case and comes with a numbered certificate of authenticity; it has a mintage limit of 1,200 pieces and costs £1,195.