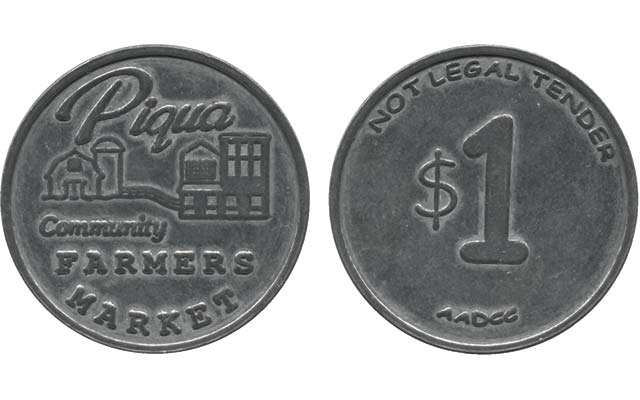 In Piqua, Ohio, the weekly farmers’ market has made cast aluminum “market money” available for buyers. Made in the same town, the “money” means locally-made funds can be used to buy locally-raised food. 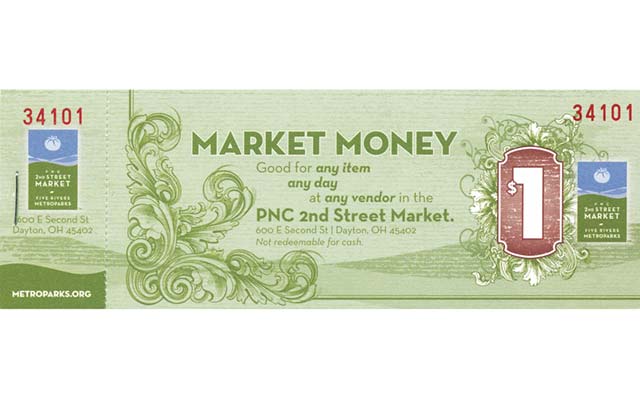 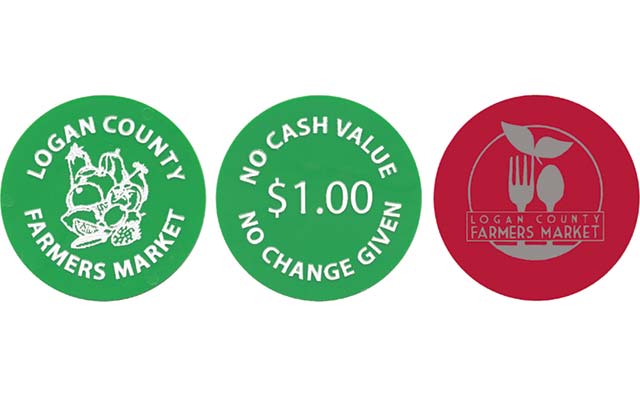 Plastic tokens are employed in Bellefontaine, Ohio, for the Logan County Farmers Market. Children receive two red $1 tokens every week to spend on fresh food, and electronics benefit transfer recipients may redeem some of their benefits for green plastic $1 tokens good for certain fresh food items. 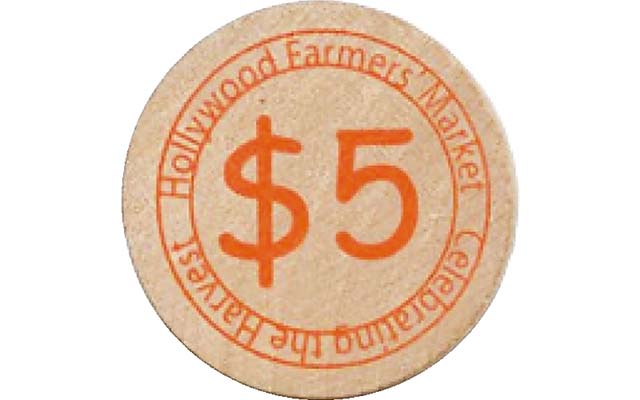 Portland, Ore., may be the center of the local food movement. The Hollywood Farmers Markets there uses wooden tokens, like the orange token available to anyone. 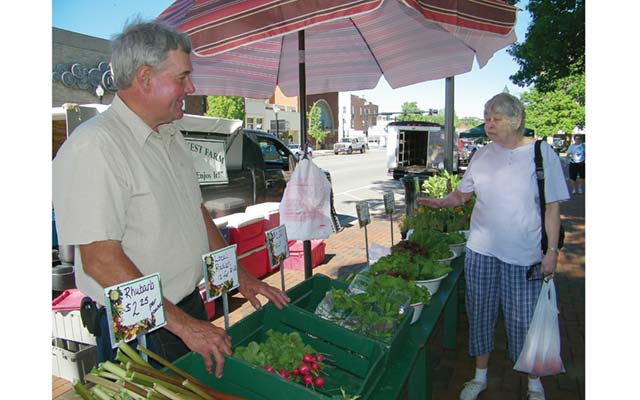 Tom Brown of Hilltop Harvest Farms discusses his produce with Dorothea Shadoan during a farmers market in Sidney, Ohio.

Now that many farmers’ markets around the country are opening for another season, the money-minded have a new crop of collectibles to consider.

In recent years, the use of wooden nickels, metal tokens, and paper scrip at farmers’ markets has increased, leaving many items for the intrepid collector to track down. And it gives the phrase “paper or plastic” a whole new interpretation.

Last year, metal, plastic, and paper examples of monetary substitutes were found at farmers’ markets within a few hours of Coin World’s office in Sidney, Ohio, and many markets around the country are using scrip substituting for money. This usage mirrors the growth in farmers’ markets nationally over the past decade.

In 2014, 8,268 farmers’ markets were identified as operating in the United States, according to an Aug. 14 announcement by the U.S. Department of Agriculture. That number has more than doubled compared to the 3,706 markets of a decade earlier. Much of that growth was concentrated in the last four years — the number of farmers’ markets has grown nearly 35 percent since 2010.

One factor driving the growth in farmers’ markets is the increasing number of locavores, which are generally described as people who focus on consuming food that is harvested within 100 miles of their location. For the most part, we’ll stick to that definition as we explore the burgeoning demand for farmers’ market money.

Around 2010, the Main Street Piqua organization, which runs the city’s farmers’ market, commissioned a local company to produce “market money,” which is available for purchase every Thursday during the Piqua Community Farmers Market season.

Each market money token is valued at $1 and can be purchased like a gift certificate and used at any of the market vendors.

The tokens were produced and donated by Apex Aluminum Die Casting Co. The Piqua-based company specializes in parts for the automotive, industrial, and electronics industries.

“The money is made of Zamak alloy [zinc, aluminum, magnesium and copper] and die cast in a mold we designed,” according to company owner Pat Zimmerman, in a press release.

“It’s neat that in our home grown farmer’s market, which sells local produce, we can use tender that is locally produced,” Zimmerman said.

Lorna Swisher, director of Main Street Piqua, told Coin World that several hundred tokens were made. Each is slightly larger than a Kennedy half dollar.

The market money is used as prizes for community-wide baking and salsa-making contests, and circulates occasionally, as heard from witnesses firsthand.

Because of the costs of manufacturing, metal money substitutes are less frequently encountered than other types, like paper, plastic or wood.

Further down I-75 is Dayton, the birthplace of flight and home of the Wright Brothers.

There, a 104-year-old railroad depot has been converted into a market space. The PNC 2nd Street Market operates three days a week, bringing local produce and dining to the northeast part of the city.

Paper scrip, denominated $1 and sequentially serially numbered, is printed, one side only, on rectangular, almost cardboard-thick, greenish paper, the same width as Federal Reserve notes but half an inch shorter in height. A staple binds together a bundle of the detachable scrip.

This market money offers some of the familiar design elements of paper money, like scrollwork and a frame containing the denomination, though none of the intricacy of intaglio printing. A few splashes of color in the market logo, behind the $1 denomination and in the serial number also stand out when compared to the federal alternative.

During my visit in the summer of 2014 the paper scrip was available in bundles of $5 or $10. I did not witness any market money change hands during a few hours at that market, but a few vendors recognized it from previous transactions.

About 35 minutes east of Sidney on State Route 47 is Bellefontaine, county seat of Logan County.

Stop at the market manager’s booth at the tip of the Saturday market, and you will find signs for farmers’ market “coins,” which are plastic tokens here.

Thanks to funding from a local foundation, the market operates the Power of Produce kids club. Every child age 5 to 12 years old can receive $2 in red tokens to spend on fresh produce, every week they come to market.

Some 30 counties in Ohio have farmers’ markets that accept the plastic EBT card, and some markets issue tokens as part of that service.

In many cases in Ohio and the United States, farmers’ markets that accept local, state, or national Supplemental Nutrition Assistance Program funds allow recipients to redeem benefits by trading value on cards for tokens at the market.

Often, additional programs with separate funding provide matching or partial matching funds, usually given in tokens or scrip, for those recipients. An alphabet soup of agencies and programs — federal, state and others — help farmers’ markets serve low-income communities, but many have restrictions limiting how the money substitutes may be used, and outlawing the trading of the tokens for cash.

Wooden money is a very popular choice for farmer’s markets.

In Clintonville, Ohio, near Columbus, red wooden tokens are used for EBT or SNAP users, and the public may use their debit cards to buy green wooden tokens.

That approach is popular around the country.

In the state of Oregon, at Portland’s Hollywood Farmers Market, three different types of wooden money are in circulation.

Two $1 wooden tokens, in either green or purple ink, are employed for SNAP recipients. The purple token is issued through the market’s Fresh Funds Program, in which $5 in tokens are offered to SNAP recipients each market session. The green $1 tokens are purchased with a SNAP/EBT card. The $5 token, in orange ink, is available, however, to either EBT users or to members of the public using debit cards.

Designs for wooden nickels are up to the issuing markets, and while many simply show a logo or denomination or both, sometimes issuers get creative.

In New Orleans, wooden $1 and $5 tokens at the Crescent City Farmers Market have changed annually, with the 2012 tokens honoring Cajun cook and author Eula Mae Dore, after celebrating the late culinary educator Lee Barnes in 2010 and 2011, for instance.

Just how much market money is out there? Two examples reveal the scope of possibilities.

A program in Detroit saw more than $200,000 worth of tokens used in the first three years.

Restrictions to participants receiving assistance and the lack of trade-in status for cash may mean that only a limited number of pieces will be saved for potential collectors. Even so, it shouldn’t be too hard to become a locavore, numismatically speaking.