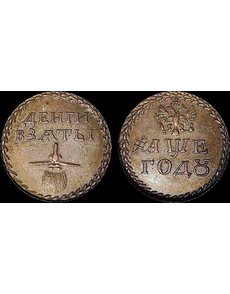 This 1705 Peter I novodel beard token displays a nose, mustache, pair of lips and beard on the obverse and the Russian imperial eagle on the reverse. This piece was sold by Heritage Auctions in 2007 for $2,760.

Windows, beards and scrapped cannons all have a connection to coin collecting. Here’s a brief trip down some of the stranger byways of our hobby.

By the reign of William III, English coinage was in disarray. Hammered coinage — irregularly shaped coins literally made by hammering planchets between dies — had been so badly clipped by cheats that they traded by weight rather than stated value, complicating commerce no end.

In 1696, William called in all the hammered coins and replaced them with milled or machine-made coins.

To pay the £180,000 cost of the recoinage, William III levied a property tax — 2 shillings on homes with up to 10 windows and double that for homes with 10 to 20 windows.

Many homeowners bricked over windows to reduce the tax bill. The unpopular window tax remained in effect until 1851, though the rate was changed during the century and a half it was collected.

A few years after William started taxing windows, Russian Czar Peter the Great began taxing bearded men as part of his effort to modernize the country.

Peasants and clerics were exempt, but everyone else who wanted to wear a beard had to pay an annual fee and carry a medal as proof of payment.

The first medals were round affairs showing a nose, mustache and beard on one side and the imperial eagle on the reverse.

Later issues were diamond shaped and dropped the images but bore the legend, “The beard is an unnecessary burden.”

In 1689 and 1690, the disposed James II, while engaged in a futile effort to regain the crown of England, issued vast quantities of coins in Ireland. The coins were denominated as 6 pence to crowns — normally silver at the time — but made of base metal.

Collectors call the coins gun money. They were struck on planchets made from scrap metal — old cannons, broken bells and even kitchen utensils. The coins are notable, also, because they were dated by month as well as year.

James intended to redeem the coins with silver in the order in which they were minted. However, James’ armies never made it out of Ireland. William III’s forces defeated him at the Battle of the Boyne on July 1, 1690. James fled to France, never to return.

Holders of the coins were left with near worthless money. William and Mary, who ruled from 1688 to 1694, honored the gun-money coinage, but only at greatly reduced value. Large denominations were allowed to pass as pennies; sixpences at a farthing.