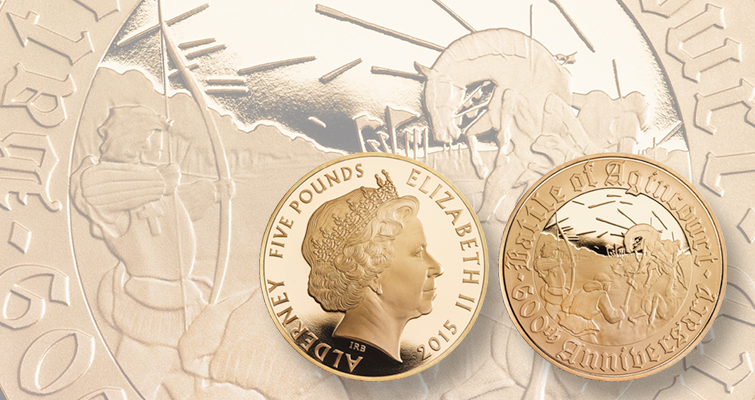 The Royal Mint is issuing gold and silver collector coins for Alderney to commemorate the 600th anniversary of the Battle of Agincourt. The gold £5 coin, shown, has a mintage limit of 75 pieces. 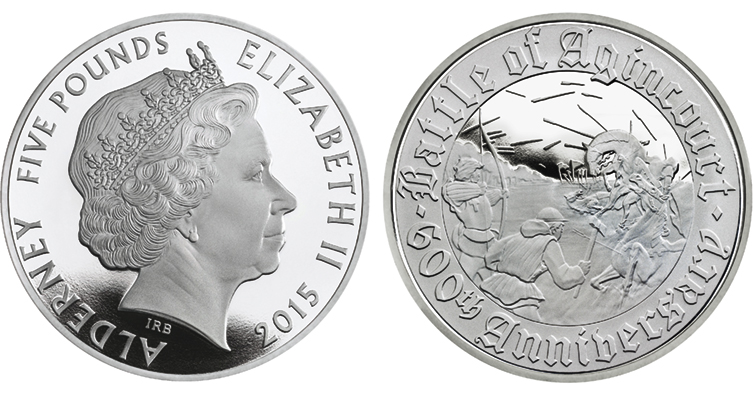 A Proof .925 fine silver version of Alderney’s 2015 Battle of Agincourt anniversary coin has a mintage limit of 1,500 pieces.

The Royal Mint has announced plans to strike coins commemorating the 600th anniversary of the Battle of Agincourt, regarded as one of history’s greatest military victories, led by England’s King Henry V.

Fought on Oct. 25, 1415, this pivotal moment in the Hundred Years’ War was characterized by muddy terrain, deadly longbows used by the English and Welsh archers, and strategic tactics employed by King Henry V. The story dates back six centuries, but it is documented to this day, including in literature and on stage in William Shakespeare’s Henry V.

Davies’ design for the Battle of Agincourt coin places the audience at the heart of the scene.

“The idea behind my approach to the design was to show the overwhelming odds against the diseased and weakened English army that defeated that of the French. Although the battle is famed for the use of the Longbow, much of the disaster that befell the French army was, however, due to their belief in a chivalrous code of conduct,” Davies said.

“I tried to get a sense of the mayhem and confusion that the French forces fell into and the significant role the archers performed in the battle,” he added. “The design shows a lightly armored archer in the foreground with a hatchet or hammer, weapons thought to have caused damage and deaths to the French knights as did suffocation in the mud. The French are depicted in heavy armour and on horseback. Trees surround the field as they also played a significant role in the French defeat.”

Historians estimate that the French army had 12,000 to 15,000 soldiers gathered at Agincourt, mainly men at arms. By contrast, Henry V’s English army had only 8,000 to 8,500, the majority being archers.

Considering the victory to be theirs, the French celebrated the night before the battle, their frivolity heard by Henry’s men who, under their king’s orders, waited for the sunrise in silence.

On the day of the battle the French were unprepared, and quickly fell into disarray when they faced the arrow storm of Henry’s archers — the longbow was a formidable long-range weapon.

The French had planned to knock the English archers out of the fight with a cavalry charge, but fearing that arrows would harm their horses, too many men refrained from the attack on horseback. King Henry, meanwhile, had ensured his archers were protected by a wall of stakes and by flanking woodland. The French charge failed, and the retreating cavalry clashed into the French men-at-arms advancing on foot. The arrow storm slowed their advance as well, and the men became crowded in on each other. They were so tightly packed they could not raise their weapons. Some fell and were suffocated in the mud when others piled on top of them, and some fell at the mercy of Henry’s archers.

After the victory, Henry V advanced to Calais, and when he returned to England, was greeted by fanfare at his entry to London on Nov. 23.

Both coins measure 38.61 millimeters in diameter.

To order either coin, visit the Royal Mint website. 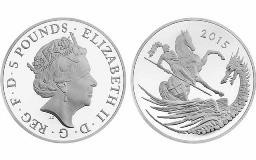 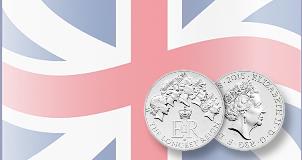 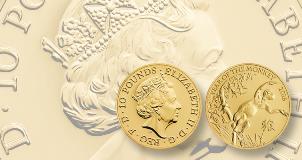