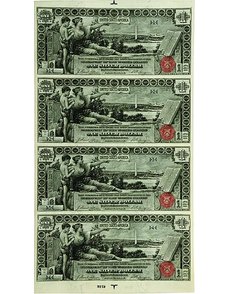 Uncut sheets of 1896 $1, $2 and $5 silver certificates serially numbered 1, 2, 3 and 4 from the Harry W. Bass Jr. Collection are among the items scheduled to be auctioned Aug. 17 at the American Numismatic Association World’s Fair of Money near Chicago by Stack’s Bowers Galleries. 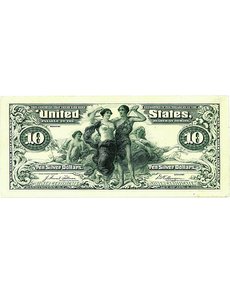 This 1897 $10 silver certificate proof displays a design based on a painting by Walter Shirlaw featuring the allegorical figures of Agriculture and Forestry.

The Harry W. Bass Jr. paper money collection showcasing the development of the popular silver certificate “Educational Notes,” will be offered at auction Aug. 17 at the American Numismatic Association World’s Fair of Money near Chicago.

The Bass offering consists of several dozen essays, proofs and other unissued denominations, all of extreme rarity and some even unique.

According to Stack’s Bowers Galleries, this series illustrates the development of the beautifully designed “Educational Notes” and culminates in an intricately bound set of three uncut sheets — with serially numbered notes 1, 2, 3, and 4 of the 1896 $1, $2 and $5 silver certificates.

Included are documents that pedigree the set back to the time of issue. These silver certificates had been on display in the Harry W. Bass Jr. multimedia gallery at the ANA headquarters in Colorado Springs, Colo., for several years.

“In my opinion this lot is the most important lot ever offered at auction in the entire history of collecting American paper money,” said Q. David Bowers, chairman emeritus of Stack’s Bowers Galleries.

The Series 1896 $1, $2 and $5 silver certificates are generally recognized as the apex of artistry in United States paper money. A $10 denomination was designed but never released.

The three denominations that were released circulated only briefly before new designs were introduced as replacements. The faces of the Series 1896 silver certificates lacked fine lathe work, a decision that was not universally supported within the Bureau of Engraving and Printing, which designed and printed the notes. Fine lathe work is considered a security device in that it is difficult for counterfeiters to duplicate accurately.

The Series 1896 notes were replaced because officials believed a risk existed that counterfeiters could duplicate the notes before bank tellers learned to identify the notes.

The notes that replaced the Series 1896 silver certificates all had fine lathe work on the faces, as has all U.S. paper money issued since.

The opportunity to acquire the first sheets printed has never before occurred at auction, according to the auction house, and may never again.

“Hundreds of other important notes will be offered, including gold certificates, Treasury or coin notes, Legal Tender notes, Federal Reserve notes, and others, large and small. National bank notes will be a prime attraction as well, including a marvelous selection of $1 ‘aces,’ rare locations, a serial No. 1 $5 National Gold Bank of D.O. Mills & Co. note, and other highlights, plus a large selection of popular and affordable issues — literally something for everyone,” according to Chris Napolitano, president of Stack’s Bowers Galleries.

Paper Money Guaranty will be providing its services for grading of the collection prior to auction.

“We are thrilled to add our PMG expertise to the presentation of one of the most significant currency holdings of our time. Indeed, the certification experience will be always remembered by our staff,” said Steve Eichenbaum, PMG CEO.

“The Harry W. Bass Jr. Educational Series is unique and absolutely definitive — the first sheets printed of the three denominations plus essays and proofs, an incredible display ... which has no equal in the field of American paper money. It has never been equaled by any auction presentation in numismatic history,” Eichenbaum said.

Stack’s Bowers will be producing a special separate catalog for the Bass collection auction.

Bass was also known for his collection of rare and unique early gold coins dating from 1795 to 1834 by date, denomination and die variety.

Along the way he also assembled important holdings of patterns, paper money and more, ranking him as one of the most important collectors and scholars in numismatics, notes Stack’s Bowers Galleries.

For more information on this auction or consigning to a future auction, visit the website www.stacksbowers.com or contact Christine Karstedt at chrisk@stacksbowers.com. ¦