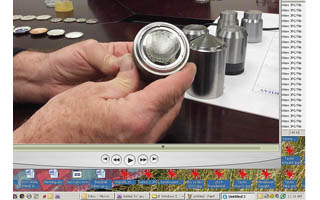 That leaves just the copper-nickel clad Baseball half dollar, in Proof and Uncirculated versions, as the lone denomination from the three-coin commemorative coin program remaining for collectors to purchase.

The half dollar has a maximum mintage of 750,000 coins. The Proof versions are being struck at the San Francisco Mint and the Uncirculated half dollars at the Denver Mint.

Exhaustion of the mintage limit for the Baseball dollars was announced by U.S. Mint officials shortly before 5 p.m. Eastern Time April 9 when a Waiting List Notice was posted on the Mint’s website at www.usmint.gov.

The U.S. Mint’s notice explains that the bureau had received sufficient orders to reach the maximum authorized mintage limit.

Orders were still being taken, but with customers placed on the waiting list. Those waiting-list orders would be filled in the order they were placed should coins become available because of orders being canceled.

The sellout of the silver dollars appeared imminent shortly after 10 a.m. April 9 when the Mint’s Office of Corporate Communications released the latest cumulative sales figures.

U.S. Mint spokesman Michael White said the afternoon of April 10 that an estimated split between the number of Proof and Uncirculated Baseball silver dollars sold was unavailable for release since sales were in “waiting list status.”

Sales for the half eagles appeared headed for a sellout between March 28 and 29, with the Mint confirming March 31 that sufficient orders had been received to cover the maximum authorized mintage.

Mint officials report rounded off half eagle sales at 32,000 Proof coins and 18,000 Uncirculated pieces, with final, audited figures unavailable until after the commemorative coin program has closed. No sales figures will be final until the program is closed entirely and sales audited. The program is scheduled to run through Dec. 31, while Baseball half dollar coins remain.