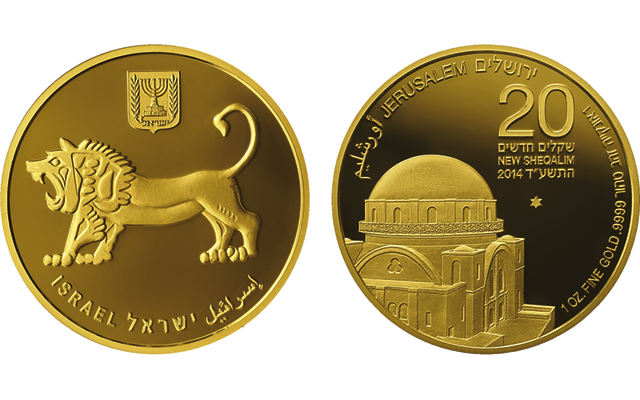 The Brilliant Uncirculated .9999 fine gold 20-sheqel coin was announced on May 27.

The synagogue was completed in 1864, years after attempts to build the center of worship in the early 18th century were derailed by a fire and the death of a rabbi. When it opened, the synagogue became the center of life in the Jewish Quarter of the Old City of Jerusalem.

It was destroyed in 1948 by the Jordanian Legion but the synagogue was rebuilt in 2010, and now appears on the reverse of the new coin.

Yaacov Enyedi designed the reverse, which also includes the year, the word “Jerusalem” in English, Hebrew and Arabic, and the Star of David Mint mark.

The standard obverse design, used for all the bullion coins, includes the Israel state emblem; the nation’s name in English, Hebrew and Arabic; and a roaring lion from an eighth century B.C. seal found in Megiddo. The obverse was designed by Meir Eshel.

The 1-ounce coin measures 32 millimeters in diameter and, unlike traditional bullion coins, has a limited mintage (which in this case is 3,600 pieces, the same mintage limit as on previous issues).

The price of the coin is determined daily by the Israel Coins and Medals Corp., at 9 a.m. Israel time, based on the closing price in U.S. dollars of gold on the London markets from the prior evening. A premium of 20 percent is added to the price. The price remains in effect for 24 hours, until the 9 a.m. recalculation the following day.

Previous annual bullion coin releases from 2011 to 2013 are also available.