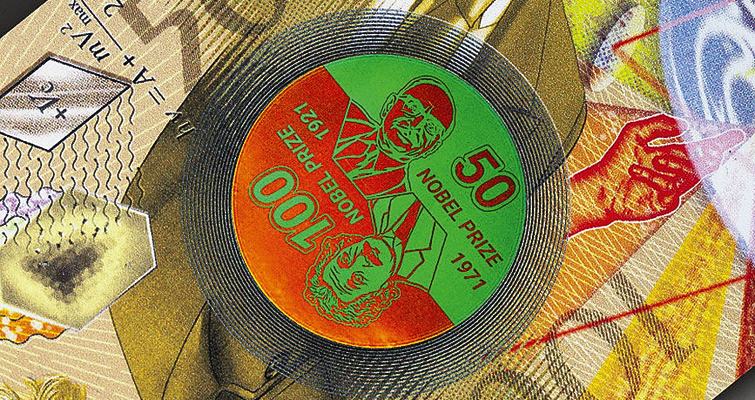 Krypten Research and Production Company of Russia was given the Innovation in Holographic Technology award for its 3D-GRAM CONTRUST Security Patch as featured on the company’s 100/50 Nobelists house note.

Holograms are not new to the world, having been used as security elements on a wide array of commercial products for decades. Despite their wide use for many products, holograms used on bank notes were winners in three of the five categories in the Excellence in Holography Awards for 2021.

The awards are given by the International Hologram Manufacturers Association, a trade group founded in 1993 to promote the interests of the industry.

The judges said they “were particularly impressed by the proven combination of design, dynamics and color shift, which provide both eye-catching appeal and raise banknote security to a higher level.”

Krypten Research and Production Company of Russia was given the Innovation in Holographic Technology award for its 3D-GRAM CONTRUST Security Patch as featured on the company’s 100/50 Nobelists house note.

The judges noted Krypten’s work to create a security patch with innovative photopolymer-based security features. In particular, it said, “The striking and catchy element with a simple and unambiguous identification” enables the patch to be applied both on paper and polymer-based bank notes and identification documents.

The house note commemorates two significant events in holography. In 1971, the Hungarian physicist Dennis Gabor received the Nobel Prize “for his invention and development of the holographic method.” And 100 years ago, in 1921, Albert Einstein won the Nobel Prize in physics for the discovery of the law of the photoelectric effect. The note has a vertical orientation and portraits of Gabor and Einstein.

The award for best origination went to SURYS of France for its Plasmogram Reverso bank note, the first application of the technology on polymer. The firm describes the technology as a three-part process.

The first involves controlling a set of distinct colors on the front that turn into rich shades of gold on the back. Each color also shifts by tilting the note, something impossible to be simulated by regular inks or traditional holograms.

A design aspect controls the perfect registration of all elements of the design. Forms, colors, animated metallic outlines, wave and virtual effects are all strategically registered to improve design and ease authentication.

Transparency is applied by holding the note against the light, when a third set of colors becomes visible on both sides.

The note itself, a limited edition “Gold Fish banknote,” is a joint effort of Surys, De la Rue as the polymer supplier, and the note printing factory of the National Bank of Kazakhstan. The note was issued as an example of the bank’s capabilities. 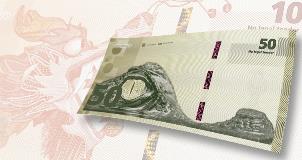 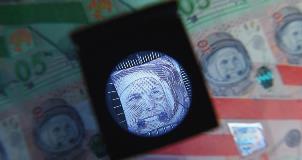 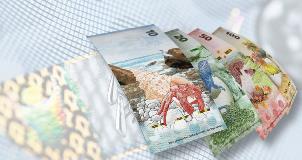