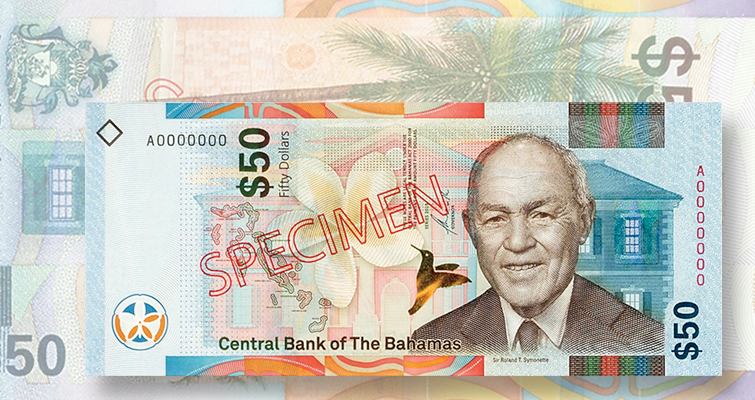 The Central Bank of the Baha­mas introduced a new $50 bank note, the sixth in its CRISP Evolution series, on Oct. 2. 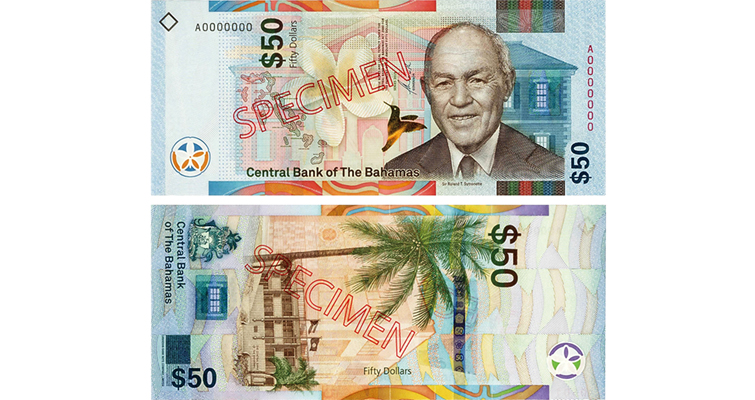 The Central Bank of the Bahamas introduced a new $50 bank note, the sixth in its CRISP Evolution series, on Oct. 2.

The series name describes the background of the new notes. “CRISP” stands for Counterfeit Resistant Integrated Security Product. “Evolution” is the term used to differentiate the new notes from their predecessor family of CRISP notes.

The series was developed in partnership with the Swiss firms Orell Füsslia for technical aspects and Landqart A.G. for the Durasafe substrate of two outer layers of cotton paper bonded with a central core of transparent polymer. CRISP bank note paper is coated with a new sizing agent to help combat chemical removal of ink from the paper by counterfeiters.

The 156- by 67-millimeter note is mainly light blue in color, with touches of pink, green, orange, and brown.

The face has a portrait of Sir Roland T. Symonette, who served as served as the first premier of the Bahamas from 1964 to 1967. As one of the wealthiest people in country, he was one of the participants in a financial group that opened up the Bahamas to tourism and investment, particularly from the United States, with gambling casinos as an important part of their equation. He also reportedly profited handsomely from bootlegging whiskey into the United States during Prohibition. On the left is a watermark of Symonette and the numeral $50, a replica map of the Islands of the Bahamas, and the denominational value in words and figures. A blooming frangipani flower is in the center. The background shows the middle building in Nassau’s Parliament Square.

The back, with a vignette of the Central Bank of The Bahamas building in Nassau, is in a vertical orientation. The building is flanked above by the numeral $50 in the upper left and lower right corners, and the words FIFTY DOLLARS in the upper right quadrant. Below the building is the Bahamas coat of arms and the words CENTRAL BANK OF THE BAHAMAS. A see-through window on the left corresponds to the window on the right of the top floor of the Parliament building shown on the front.

The final denomination in the CRISP Evolution series, a $100 bill, is expected to be issued by the end of the year. The Bahamas dollar circulates at par with the U.S. dollar. 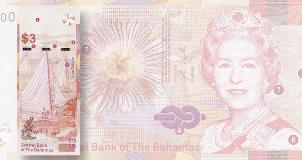 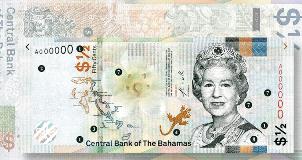 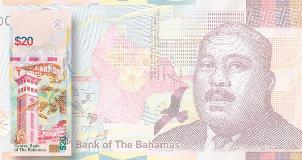