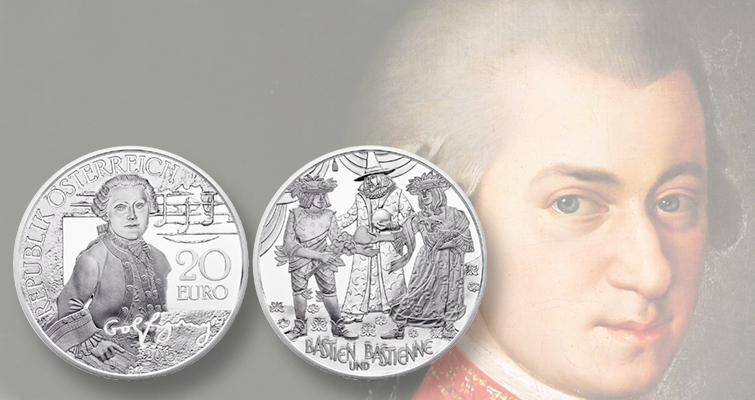 Austria honors its native son, composer Wolfgang Amadeus Mozart, with the first coin in a three-coin series. The 2015 coin celebrates Mozart as “The Wunderkind,” and depicts one of his operas.

Composer Wolfgang Amadeus Mozart is one of Austria’s favorite sons.

The first coin is the set is scheduled for release Sept. 9, 2015, and is titled “The Wunderkind.” A wunderkind is someone who achieves a notable measure of success at a young age.

The obverse of the first coin depicts a forward-facing young Mozart dressed in formal attire, which he was often seen wearing while performing for European royal courts. The engraver has captured the details of his lace cuff and neckline very clearly.

The first name of Mozart’s three-part signature is mirrored along the lower portion of the design. This side of the coin was designed and engraved by Austrian Mint engraver Helmut Andexlinger and also bears the face value, the country of issue, REPUBLIK ÖSTERREICH, and the year of issue, 2015.

The reverse, by the Austrian mint’s chief engraver Thomas Pesedorfer, depicts the opera Bastien und Bastienne, a light-hearted comic one-act opera. This side depicts the bringing back together of Bastien and his girlfriend Bastienne by a spell spoken by the magician depicted in the center. The design details the sorcerer’s cloak as well as costumes of the two young people.

The coins will be housed in a capsule accompanied by an individual box, with a numbered certificate of authenticity. A three-coin wooden collector case will also be available.

Collectors in the United States and Canada may purchase the 2015 Mozart coin from the Austrian Mint’s website.