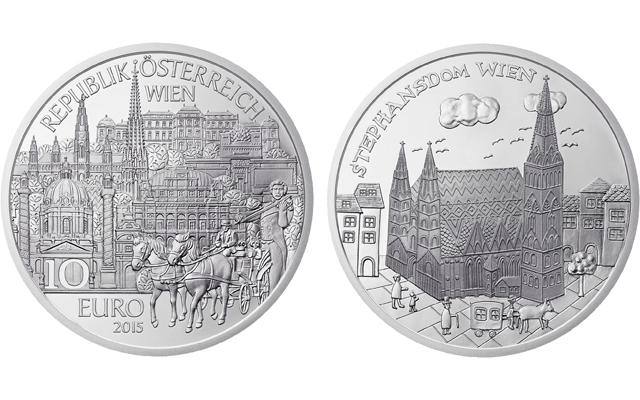 The Austrian Mint’s latest design in a coin series created with the assistance of young Austrian students celebrates Vienna. 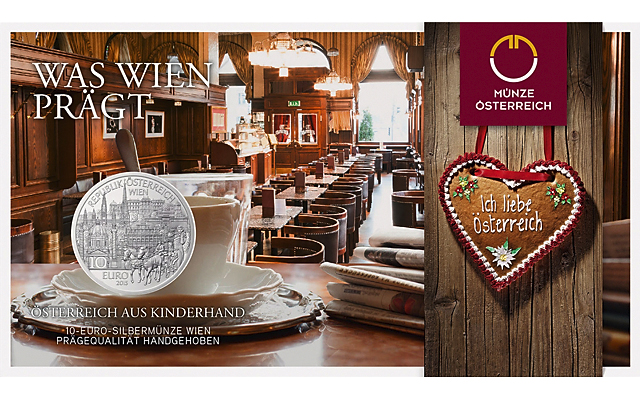 The Special Uncirculated example of Austria’s 2015 Vienna €10 coin is packaged on a colorful, informative blister card.

The Austrian Mint will release the seventh silver €10 coin in the “Austria Piece by Piece” series, which celebrates Austria’s national provinces with designs interpreted by the nation’s children.

The new 2015 coin depicts the capital region of Vienna, one of the administrative regions or provinces of Austria.

The reverse capturing key features of the capital city is from the hand of Viktoria Pinzer, the 11-year-old winner of a school competition to design the reverse.

Her design’s central feature is St. Stephen’s Cathedral, the dominant building in Vienna’s historic center, which is a UNESCO World Heritage Site. A few medieval buildings are representative of the historic center as well.

The simple design also includes one of the horse-drawn carriages that to this day remain a key attraction, and just a few pedestrians (representing the daily norm of hundreds).

The obverse of the coin features varied examples of architecture located in the city center, including the St. Charles Church, the State Opera, and City Hall. A statue of Johann Strauss and a more detailed horse-drawn carriage also appear.

The obverse of the coin also features the country of issue, REPUBLIK ÖSTERREICH, the year of issue 2015, the face value of €10 and the name of the administrative region WIEN, or Vienna.

The obverse was designed and engraved by the Mint’s chief engraver, Thomas Pesendorfer.

The strategic location of the city of Vienna along the Danube River goes back to ancient times, probably sometime around 750 B.C.

The Roman city of Vindobona was established in Vienna, which has always been a key trading location between south and central Europe because of the river location. Vienna has also hosted two major dynasties of the Austrian Empire, the Babenbergers and the Hapsburgs, through to the modern day republic.

The 2015 Vienna .925 fine silver coin is being issued in Proof and Special Uncirculated versions.

Both silver coins weigh 17.3 grams and measure 32 millimeters in diameter.

The Proof version is limited to a mintage of 30,000 pieces and the Special Uncirculated version has a mintage limit of 40,000 pieces.

Proof coins are encapsulated in a presentation case with a numbered certificate of authenticity. The Special Uncirculated coins are available in a blister pack with a Vienna-themed design on the sleeve.

A standard circulation strike version of the coin in copper will be available only in Austria.

Collectors in the United States and Canada may purchase the collector versions of the Vienna coin by contacting the Austrian Mint online.