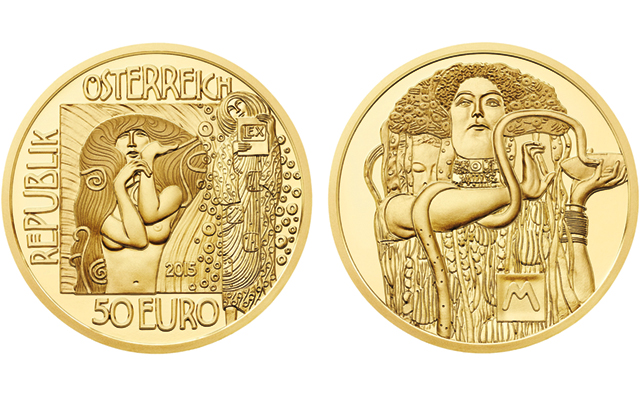 Austria’s 2015 coin from a five-year series honoring Gustav Klimt showcases the series of works known as his “Faculty Paintings.” 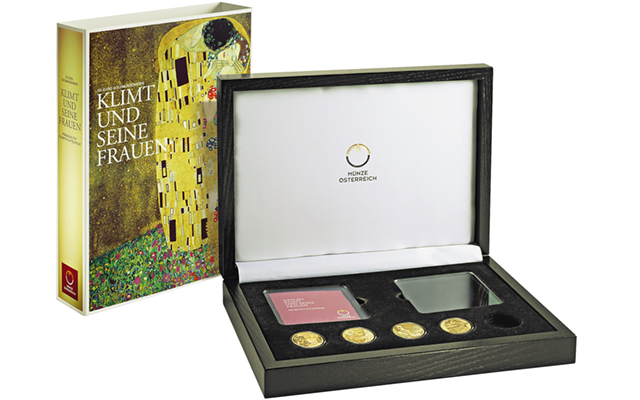 A collector case for all five coins in the Klimt and His Women series is available, allowing collectors to view the various periods of his artwork, and spell out his name, in one panorama.

The fourth coin in an annual series featuring paintings by Gustav Klimt is scheduled for release April 15, according to the Austrian Mint.

The 2015 coin from its Klimt and His Women series will feature the lost paintings that are grouped under the broad title “Faculty Paintings,” the last public commission by this Viennese master.

On its obverse, the Proof .986 fine gold €50 coin features detail from Klimt’s painting Jurisprudence, in the form of Greek deities, the Eumenides. Stylized snakes accentuate Klimt’s customary swirling patterns of the goddesses’ hair in the coin’s center, which is highlighted in a square, echoing the frame of the painting. To the right stands Justitia, the frequently used symbol of jurisprudence.

The reverse shows a detail from Medicine. The Aesculapian snake winds around the arm of Hygieia, daughter of the Greek god of medicine. In Hygieia’s left hand is the cup of Lethe. Each of the five different coin designs in the series also carries a letter of his last name — K, L, I, M, and T — on the reverse, with this fourth coin showing the fourth letter, M.

Many critics believe Klimt broke cultural taboos and pushed the boundaries of obscenity with these works, painted between 1900 and 1907 to decorate the ceiling of the assembly hall of the University of Vienna.

Originally, Klimt was commissioned to paint the three subjects of Philosophy, Medicine and Jurisprudence in an allegorical style. He was asked to rework his paintings several times, which he refused to do. Instead, with the help of his wealthy patrons, he returned the commission fee (which would be some $500,000 U.S. today) and the paintings disappeared into private hands. In 1943 the paintings were publicly exhibited one last time and then hidden in Immendorf Castle for safety during the war, along with many other Klimt paintings. The paintings were destroyed in May 1945 in a fire set by retreating German SS troops.

Each coin in the gold series features a different painting of a woman or women, representing the five major phases of Klimt’s artistic career.

Each coin is packed in an box with a numbered certificate of authenticity that provides detailed background and technical information about the coin.

A wooden collection case for the whole series may be purchased separately.

The last coin of the series in 2016 will feature The Kiss.

Collectors in the United States and Canada may purchase the 2015 coin for €450 through the Austrian Mint website, or through one of three dealers, at prices to be established by each firm:

The coin is available from American Precious Metals Exchange.

Want more information about other Austrian coins? Coin World has you coverered!