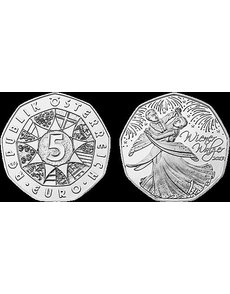 Austria’s first 2013 coin celebrates the waltz, which ushers in the new year during the Vienna Philharmonic’s worldwide New Year’s Eve concert. The silver 5-euro coin is being released Dec. 12.

A traditional, historic dance comes to life on a new Austrian coin.

The Austrian Mint on Dec. 12 will issue a 2013 silver 5-euro coin celebrating the dance known as the waltz.

The reverse of the coin depicts a couple in full swing, dancing the waltz. The woman is dressed in full ballroom dress; her skirt and the scarves draped from her wrists emphasize the swish of movement to music. The man is shown in full tux and tails, the swing of the tails highlighting their movement.

In the background are twinkling stars and fireworks, adding to the festive atmosphere of a waltz. Also on this side of the coin are the words WIENER WALZER, or “Viennese Waltz,” engraved into the design in a lyrical style, and 2013.

The obverse of the nine-sided coin, designed by Mint engraver Helmut Andexlinger, bears the standard 5-euro design, with the denomination at the center surrounded by the shields of the nine federal provinces of Austria.

Though the waltz may date back as early as the 16th century, it took hold in the late 17th century in the imperial court of Vienna and gained prominence in the late 18th century.

Starting out as a simple two-beat step it evolved into the more complicated but graceful three-quarter time.

The waltz was influenced by the southern German and Tyrolian dance known as the laendler, which was merged with the waltz in the late 18th century. The stately imperial court initially balked at the dance’s requirement of dance partners being extremely close. The result was the Viennese Waltz, light and fast in style, which invited participation, helping to spread its popularity in the late 18th century all over Europe.

The Special Uncirculated .800 fine silver 5-euro coin weighs 10 grams, measures 28.5 millimeters in diameter and has a maximum mintage of 50,000 pieces.

For the first time, the Austrian Mint is offering 5,000 coins in an English-only package. The remaining 45,000 pieces will be available in a German-only folder.

The 300,000 copper coins struck by the Austrian Mint for circulation in Austria will be available only through Austria’s banks.

Collectors in the United States and Canada may purchase the Waltz silver coin in English packaging for $24.95 by calling Euro Collections International at 877-897-7696 or visiting its website, www.eurocollections.com. ¦