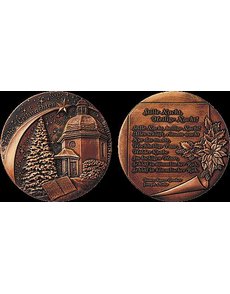 The Christmas carol “Silent Night” has origins in Austria that are celebrated on new medals from the Austrian Mint. The 40-millimeter patinated copper version appearing here is one of three options available.

The sounds of the Christmas season are now immortalized in medallic fashion.

Titled “Stille Nacht, Heilige Nacht” in the original German, the song has been translated and sung in at least 140 different languages, according to the Austrian Mint, and recorded by such diverse artists and groups as Elvis Presley and the Vienna Boy’s Choir.

Memorably, it was simultaneously sung in German, French and English in December 1914 in trenches along portions of the Western Front during the unofficial cease-fires known as the “Christmas truce.” The “truce,” observed during the first year of World War I, was prompted by troops on both sides of the conflict preparing to celebrate Christmas.

The medal’s obverse shows an idyllic winter landscape — the tiny Silent Night Memorial Chapel, a pine tree in the foreground with the date 2012, an open book at the bottom of the design and a shooting star in the sky above that leaves words translating to “Merry Christmas” above its trail.

The reverse of the medal shows the opening lines of “Silent Night” written on a song sheet, framed at the right with poinsettias.

Three versions of the medal are offered — small and large patinated (toned) copper medals and a small .999 fine silver medal.

The small copper medal and the silver medals each weigh 40 grams and measure 40 millimeters in diameter, while the 70-millimeter copper medal weighs 200 grams.

The silver medal is accented by gold-plating on the shooting Christmas star.

The medals are housed in display boxes.

The small copper medal is priced at $49.95, the silver medal costs $85 and the large bronze medal is available for $149.

Distributor Euro Collections International offers the medals. To order, telephone the business at 877-897-7696 or visit its website, www.eurocollections.com. ¦