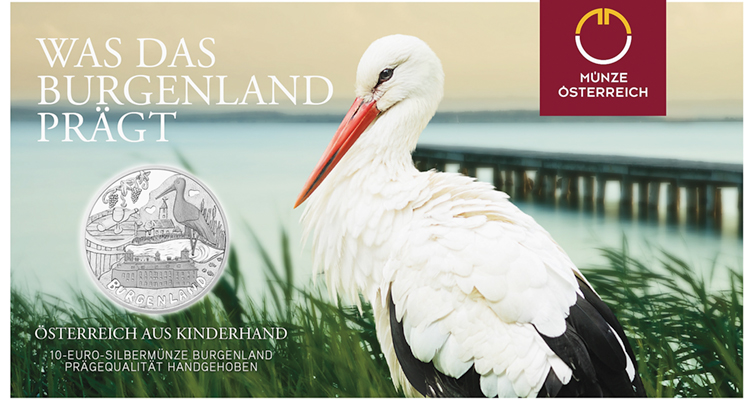 The Special Uncirculated version of the Burgenland silver €10 coin is presented in a colorful blister package and has a mintage limit of 40,000 pieces. 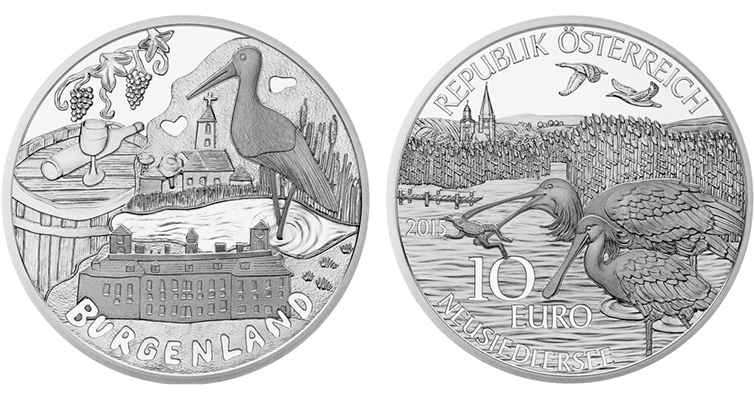 Austria’s eighth silver €10 coin in the Austria By Its Children: Piece By Piece series honors Burgenland.

The Austrian Mint’s series of silver coins designed by children continues with the Oct. 7 release of a coin for the eastern province of Burgenland. The issue is the eighth coin in the Austria by Its Children: Piece by Piece program.

The obverse of the €10 coin was designed and engraved by mint engraver Helmut Andexlinger. The design features the UNESCO World Heritage Site of the Lake Neusiedl and some of its many migratory birds — pelicans, one with a frog in its bill, and ducks, which use the lake as a natural habitat. The shores depict the abundant reed beds key to this region’s natural habitat. A dock is located in the left area of the design. Two church steeples are visible as well, located in the regional town of Rust.

The obverse also features the name of the issuing country, translating to “Republic of Austria,” the year of issue (2015), the face value (€10) and the name of the province, BURGENLAND.

The reverse of the coin bears the design created by Leonie Schrollenberger, a student at a regional grade school who won the design competition for this coin. Austrian Mint Master Engraver Thomas Pesendorfer then worked with Schrollenberger to accommodate the areas of bright color to the textures and relief of a coin. For example, the blue sky of her original drawing becomes the texture as seen behind the stork on the right side of the coin’s reverse. The stork is, of course, standing in Lake Neusiedl.

Schrollenberger also included a charming depiction of the castle of Esterhazy in the foreground and a village centered around a church in the central field. In the upper left area of the design she has included two bunches of grapes on a vine, as well as a wine glass and bottle atop a wooden wine cask.

Burgenland is Austria’s easternmost administrative region and bills itself as “the sunny side of Austria.” The region is best known for the National Park of Lake Neusiedl, numerous spas and of course, its wine production.

Two versions of the silver €10 coin are available.

A Proof version, encapsulated in a presentation case with a numbered certificate of authenticity, is limited to a mintage of 30,000 pieces. The certificate includes all the technical details as well as background information about the series.

A Special Uncirculated version is limited to 40,000 pieces. These collector coins are available in a blister pack with a Vienna-themed design on the sleeve.

A copper version, with ridged edge, is available only in Austria.

Austria has nine provinces, and so one coin remains in the series.

Collectors in the United States and Canada may purchase the Burgenland coin by visiting the Austrian Mint website.

A price was not available at press time.