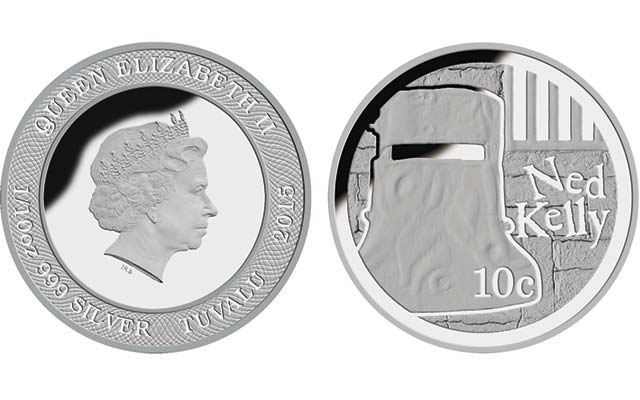 Australian outlaw Edward “Ned” Kelly is the subject of a small silver 10-cent coin being issued in the name of Tuvalu by a private company called the Melbourne Mint. 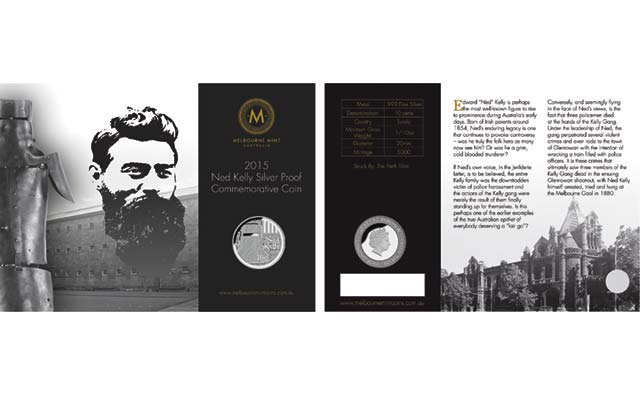 Packaging for the Ned Kelly 10-cent coin shows the famous outlaw and describes the legend behind his capture and death.

A famed outlaw from Australia, Edward “Ned” Kelly, is the new face of the first coin from the modern Melbourne Mint.

Though the Melbourne Mint hasn’t operated as a branch of the Royal Mint since 1968, the name has been revived on a new, private company in Australia, and the business is issuing coins. The first is issued in the name of Tuvalu.

However, while Melbourne Mint offices operate from the original Mint building, which has stood for 143 years, the coins are actually struck by the Perth Mint.

The subject of the company’s first coin, Ned Kelly, is thought to be either a victim of police harassment or, conversely, a brutal, cold-blooded murderer. The story of Kelly and his capture following a gunfight in Glenrowan is a part of Australia’s folklore.

The reverse of the coin shows Kelly’s famous bulletproof helmet and pays tribute to the Old Melbourne Gaol where Kelly met his ultimate demise in 1880.

The coin measures 20 millimeters in diameter and has a mintage limit of 5,000 pieces. Each coin is presented in a detailed, numbered presentation card.

The Melbourne Mint’s Ned Kelly commemorative issue is due for release worldwide on March 2 at a recommended retail price of $24.95 Australian (about $19.46 U.S.).