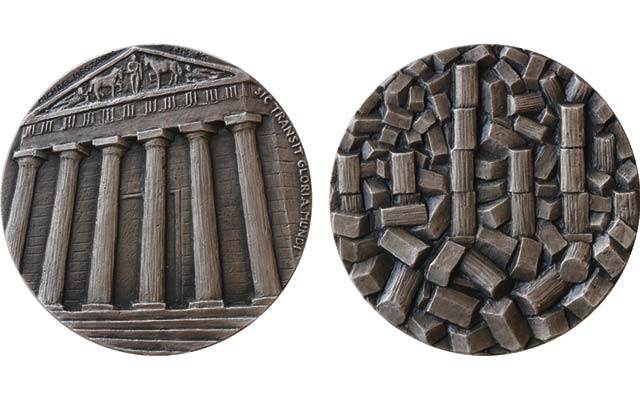 The following is a news release written and released on behalf of the American Medallic Sculpture Association by Mel Wacks:

Out of 29 medals entered, only two were not created by Americans — and one of those won — Sic Transit Gloria Mundi (Thus passes the glory of the world) by the venerable Australian medalist Michael Meszaros.

Michael Meszaros indicates that “My thoughts leading to this design were prompted by the arrogance of so many of today’s leaders and politicians combined with a visit to Rome in October 2013.

“With my wife, we spent a lot of time wandering around the forums and other ruins. I had become familiar with them originally in 1969 when I spent seven months there studying at La Scuola dell’Arte della Medaglia.

“Having studied architecture in Melbourne, I am familiar with how many regimes over the centuries have tried to cement their political futures with overblown neoclassical architecture.

“Most of them have collapsed or are much reduced. All these thoughts combined to the design where the ambitious building is on one side and the eventual demise is on the other. I have always liked the idea of a double sided medal with a time lapse between the sides and it seemed to all fall together.

“Using the Romans own saying for the title shows that even they realized that nothing is forever.”

Collectors interested in this prize-winning 99-millimeter bronze medal, weighing 12.4 oz., limited to 40 pieces, can obtain it from Meszaros for $325 including shipping by contacting him at meszaros.sculptor@gmail.com.

Nominations for the American Medal of the Year were invited from medalists, mints, jurors, AMSA members, or anyone else by March 1, 2015, for the preceding calendar year.

Meszaros was able to enter as an AMSA member. Later this year, he will be presented with the AMY Award, designed by Heidi Wastweet.

The seven distinguished jurors are: Philip Attwood, curator of Medals, Department of Coins and Medals, British Museum and editor of Medals; Cory Gillilland, member of the Consultative Committee of Fédération Internationale de la Médaille d’Art and formerly curator and deputy director of the National Numismatic Collection at the Smithsonian Institution; Barbara Gregory, editor of The Numismatist; Arthur Houghton, former curator of antiquities at the J. Paul Getty Museum and president of the American Numismatic Society; Steve Roach, editor of Coin World, and formerly paintings specialist at Christie’s; Dr. Alan Stahl, curator of Numismatics, Princeton University, and one of the founders of AMSA; and Dr. Benjamin Weiss, medal collector and author, member of the board of directors of Medal Collectors of America and its webmaster.

The voting was very close, with one juror having to break a 3-3 tie. The runner-up was Invisible Reconnoiter I by the prominent American medalist Mashiko.

It was the hope of the AMSA Board that an annual American Medal of the Year would inspire the members of AMSA in particular and all American medalists in general to create more art medals.

Mel Wacks, chair of the AMY Planning Committee, indicated that “The high quality of the first year’s entries bodes well for the future of the competition and for medallic art.”

The AMSA newsletter publishes news of workshops and exhibits, and illustrates noteworthy art medals produced by members and others both in the United States and overseas.