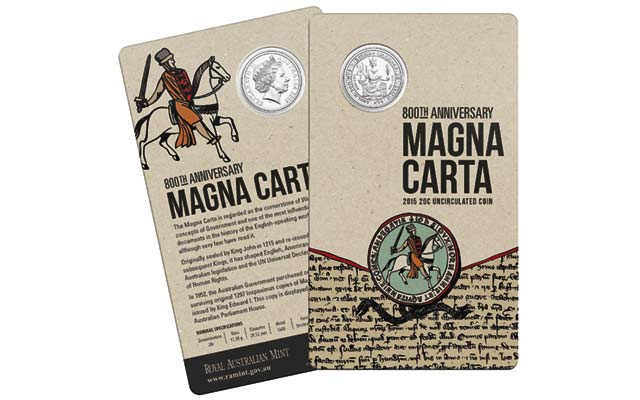 A 2015 copper-nickel 20-cent coin from Australia honors the 800th anniversary of the Magna Carta. 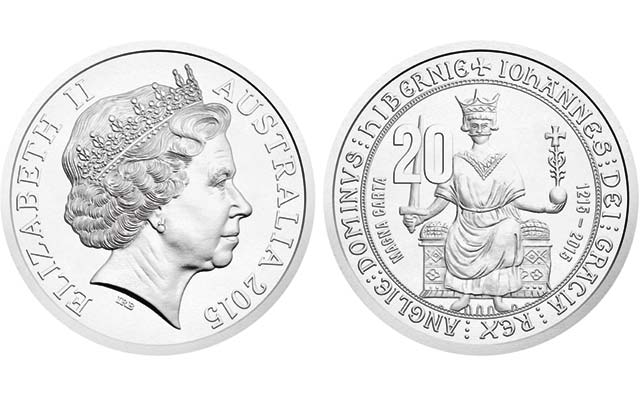 The Royal Australian Mint celebrates the 800th anniversary of the Magna Carta with a noncirculating, legal tender 20-cent coin.

The reverse of the Uncirculated 2015 copper-nickel 20-cent coin depicts a representation of King John’s original great seal on the 1215 Magna Carta.

On 15 June 1215 in Runnymede, Surrey, King John placed a royal seal on one of the most important documents in human history.

The Magna Carta (Great Charter) was a revolutionary declaration, as it required that any future rulers were also bound by laws. The Magna Carta is regarded as the foundation of justice in the West.

The Magna Carta has been reissued by monarchs throughout history, including the 1297 Inspeximus issue sealed by King Edward I, which now is housed at the Australian Parliament House.

The coin weighs 11.3 grams and measures 28.52 millimeters in diameter.

The coin is presented in a colorful, informative card.

To order the coin, visit the Royal Australian Mint eShop.

Do you like Australian coins? Check out these stories to learn more!

The Royal Australian Mint is celebrating its 50th birthday