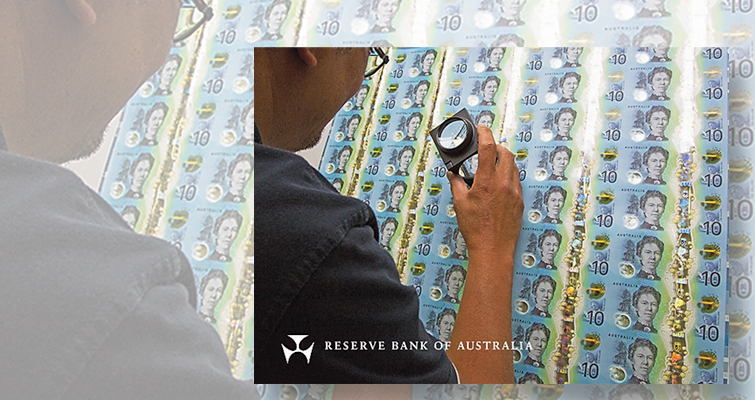 The Reserve Bank of Australia has released the design of the new $10 bank note that will enter circulation in September 2017. 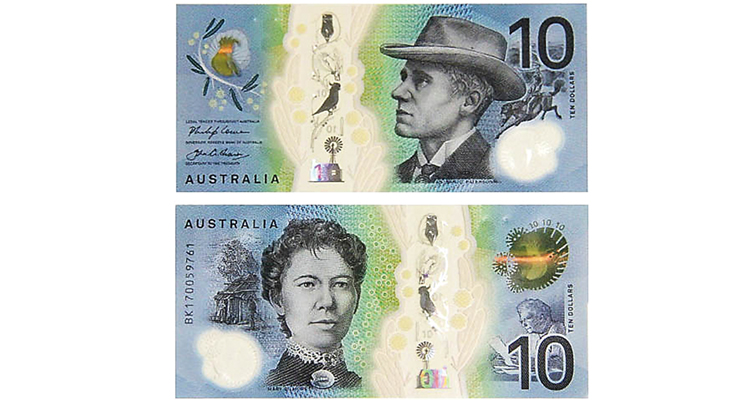 Images for Australia’s $10 bank note reveal the design of the higher tech Fourth Issue $10 bank note scheduled for release in September 2017. The images show the basic design artwork on each side of the banknote. The white areas are clear.

The Reserve Bank of Australia has released the design of the new $10 bank note that will enter circulation in September 2017. This is the second issue in the bank’s Fourth Series of notes. The $5 note was issued in September 2016.

For ease of recognition and minimum business disruption, the Fourth Issue $10 note has the same color, size, and subjects as the Third Series $10 note but with enhanced security features. It celebrates the same two famous Australian writers, Dame Mary Gilmore and A.B. “Banjo” Paterson. Their individual works are recognized in several design elements on the bank note, including a pen nib in two of the clear windows and excerpts of their poetry in microprinting.

The note also has a clear patch with a rolling color-changing effect, holograms, areas that are visible only under ultraviolet light, intaglio printing, and tactile features along the edge in the form of raised bumps to assist the visually impaired.

Each bank note in the new series will feature a different species of native Australian wattle and bird. The $10 note shows the bramble wattle (Acacia victoriae) and the sulphur-crested cockatoo (Cacatua galerita).

Full details of the design and security features on the new $10 bank note are available on the bank’s website.

More about the new note program

Here is what the Reserve Bank of Australia says about its note redesign program:

“A core function of the Reserve Bank is to maintain public confidence in Australia’s banknotes. Australia has one of the safest and most secure currencies in the world and has experienced relatively low levels of counterfeiting for many years. To ensure that this continues to be the case, the Reserve Bank researches anti-counterfeit technologies and developments in banknote design.The results of this work have culminated in a project to upgrade the security of Australia's banknotes.

“The first denomination in the new series, the $5 banknote, was issued on 1 September 2016. The $10 banknote will be issued in September 2017, followed by the $50 then the remaining denominations in subsequent years.

“Considerable work has already been undertaken on this project, including the development and review of banknote designs and production trials of new security features. It is important that the new features are durable, effectively incorporated into the banknote designs and rigorously tested. One aspect of this process is that the Reserve Bank has consulted extensively with key users of banknotes, including banknote equipment manufacturers, retail organisations, financial institutions and the vision-impaired community. Advice has also been sought through a number of channels during the development process, including a Design Advisory Panel, subject-matter experts and focus groups comprising members of the public. These ongoing consultations provide an opportunity to ensure that the new banknotes meet the needs of the community.”

More can be found here.