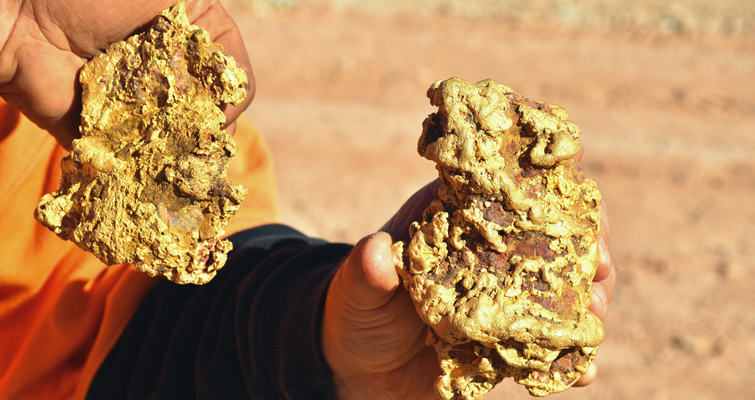 Australian gold hunter Brent Shannon knew he and his hunting partner Ethan West were on to something when wood “props” or supports started showing up among the dirt his excavator was ripping from the ground of the gold fields of Victoria.

With two weeks left in the season before temperatures sent the duo — assisted by Shannon’s father-in-law (and Ethan’s dad) Paul West — elsewhere in the country to hunt for gold, the men found two giant gold nuggets, together offering 123.5 ounces of riches.

The nuggets have a precious metal value alone of about $240,000 U.S., and collector value could add 30 to 50 percent to that total.

The men, composing the Poseidon Crew, are some of the stars in the fifth season of the television docuseries Aussie Gold Hunters.

Find gold Down Under

The episode where the men found the gold aired Aug. 24, but they found the nuggets back in April.

The largest nugget, weighing 78.5 troy ounces, was found first, with the smaller one (totaling 45 troy ounces) found just hours later in the same day, about 16 meters (52.5 feet) away.

“If we don’t get something today out of this hole, we might as well pack up and go home mate. It’s got all the signs of a loaded hole,” Shannon, 41, says in the episode.

He has been mining gold in the area for more than 15 years. The Poseidon crew has two claims in the area, and these nuggets were found in the smaller one, measuring 5 hectares (12.3 acres, or 50,000 square feet).

In an interview with Coin World, Shannon explained why he was so certain the men were going to strike gold there that April day.

The site where the team was searching had been mined by old-timers during the Victorian gold rush, which ran from 1851 to 1860, but later hunts continued into the 1900s. While Victoria’s goldfields were home to some 90 percent of the largest gold nuggets found in the world, according to Shannon, some pieces, clearly, have escaped detection until modern times.

Besides better technology and equipment today, the simple fact that Shannon relied upon was that not all the ground was searched back then.

The ubiquity of the aforementioned wood props indicated that lots of gold was found in this area by the old-time miners — they would have stopped tunneling once gold stopped popping up — but it also meant that the area immediately adjacent to the tunnels was untouched, because some earth was kept in place for support.

“I was rather confident by looking at the ground [that we would find some gold there],” Shannon told Coin World. “I expected to get something. The gold gods were looking down at us.”

Having his father along

What made the find even more special for Ethan West, 29, was that his father, Paul, 68, could participate.

Ethan has been a full-time miner for 5 years, though Shannon took him to the gold fields as early as his teen years, and later compelled him to help again when, amid the global economic crisis, construction jobs dried up.

Paul had been with the team for about two weeks when the nuggets were discovered, and played a crucial role in finding the first nugget.

Shannon removed dirt from the hole and spread it out across a field, while Paul and Ethan walked across the ground with detectors, listening for tones indicating metal was present.

It was Paul’s detector that “screamed” when they found the first nugget, “buried” several inches below the surface in the dirt spread.

“It was a life-changing moment for him,” Ethan told Coin World, of his dad’s find. “A lot of people won’t even be able to see a nugget that big [in person], but to have that moment caught on camera, that’s a very special moment I’ll cherish forever.”

Paul West was clearly choked up with his discovery, as he lifted the nugget from the ground after Shannon broke the ground loose.

“I got a tear in me eye, for you,” Paul said, during the episode, to Shannon. “I’m so excited for you — you’ve been telling me about these nuggets, mate, and I’ve never seen them.”

In the episode, right after the first find, Ethan said, “This is what we came here for, all this hard work. ...”

Shannon cut him off.

That turned out to be prophetic, as just three or four hours later, the smaller nugget was unearthed.

Ethan’s detector picked up the signal on the second nugget, which, as before, Shannon freed from the dirt.

“You get one sometimes and nothing else for months,” Shannon said on the show. “That’s two in a bloody day!”

We asked, were these words merely a “script” filmed after the fact, to support the story?

Shannon asserted vehemently that the episode records their actual dialogue that day, as multiple cameras were recording.

“These shows are shot pretty factually,” he told Coin World.

The reality of gold mining

Aussie Gold Hunters is a Discovery Channel Australia production, which follows teams of gold prospectors in Western Australia and Victoria, where Shannon and West are based.

The first two seasons of the show have aired in the United States, and the show is popular around the world, aired in 125 countries.

After making a brief appearance in Season 4, the team was chosen as one of the marquee subjects for Season 5. Filming for Season 6 is underway now, and Shannon was coy about what the Poseidon crew may or may not have found.

The Poseidon crew name was taken from the gold field known as Poseidon, which was the name of the horse that won the Melbourne Cup on the day in 1906 when a giant gold nugget was found at that site.

Australia’s gold riches spur many, mostly men, to search for the precious metal, and many of the larger pieces (called chunks by Shannon in the show) are destined for the United States of America.

“By far, the biggest buyers of Australia’s gold nuggets,” Shannon said, are Americans. He figures “probably 85 to 90 percent” of the nuggets “are sold into America.”

That’s because American buyers are more willing to pay a premium for the nugget over the precious metal value.

The rising precious metal value is one reason the Poseidon crew still has their two giant discoveries.

“Keeping gold is an investment, and with the rising price of gold we’ll hang onto them for now,” Shannon said, though they are expecting to sell in the “near future.”

The old-timers, 100 to 150 years ago, would consider any nugget of more than 20 ounces a serious piece, but today nuggets as “small” as 10 ounces are in demand, Shannon said.

The term nugget was tossed around in the episode, even for small pieces. Shannon said that in Australia, any gold that can be picked up by fingers without aid is considered a nugget. Smaller particles are called fine gold or small gold.

Regardless of size, Shannon said, “Any gold is good gold — because it’s so hard to find.” 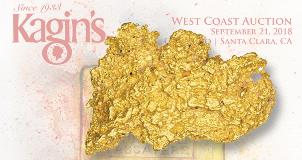 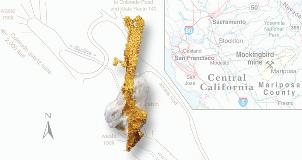 Heritage offers gold nuggets from around the world 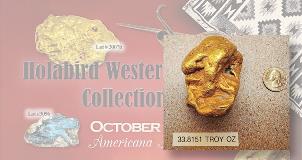