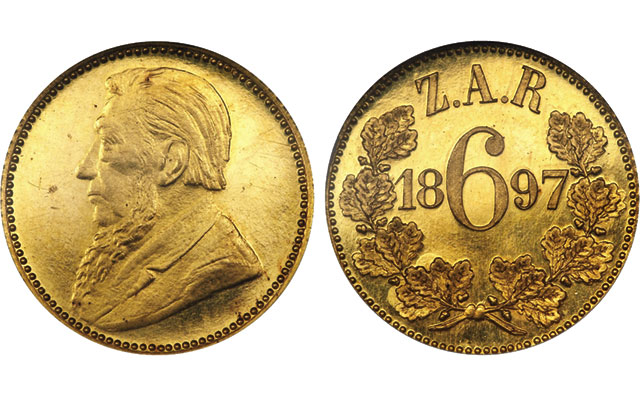 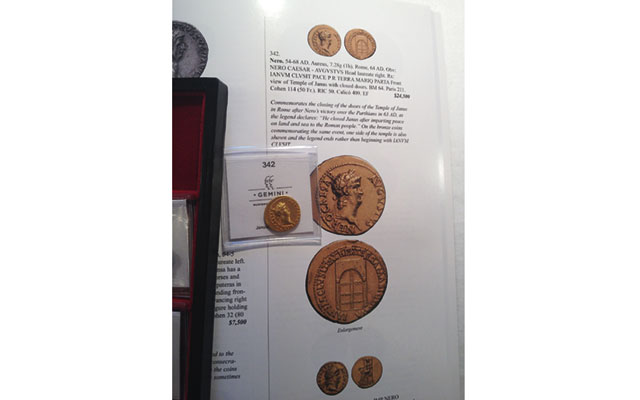 Auction lot viewing allows collectors to see rare, valuable coins up close before bidding on them.

For all the attributes the 43rd New York International Numismatic Convention possessed — including its status as the major show in the United States for collectors of world coins — the 2015 event might be as notable for what it wasn’t.

There were no marquee named collections with their own catalogs heavy enough to hold open a door, and no record-busting rarities soaring through the stratosphere in price. Still, the event delivered as promised as the epicenter of international numismatics, as slightly more collectors than arrived for the 2014 event passed through the elevator doors to the 18th floor of the Waldorf-Astoria Hotel in midtown Manhattan.

Though public show hours were conducted from Jan. 8 through 11, the real action began on Jan. 4 with auctions. During the course of eight days, 10 firms combined to conduct nine auctions offering a total of 10,292 lots.

Final figures aren’t in, and firms did not report prices in the same manner, but the auctions realized north of $32.4 million dollars. That figure is down from the $36.1 million tally reported last year, but two firms did not include buyer’s fees in their totals this year, and the Gemini Numismatic Auctions Jan. 11 sale total is not yet disclosed.

According to NYINC convention chairman Kevin Foley, 1,996 people attended this year, with 165 professional preview participants willing to pay $100 to get a head start on buying before public hours opened.

Those numbers are ever-so-slightly higher than 2014’s figures of 156 preview and 1,922 regular attendees, but multiple observers told Coin World informally that the bourse floor felt less congested in 2015 than in other years.

Foley acknowledged that multiple factors changed the look of the 2015 show, noting that attendance may have been affected by the strength of the U.S. dollar.

However, the upside for U.S.-based collectors, Foley said, is that “a stronger dollar makes it cheaper and easier for people to buy from foreigners.”

Some of these circumstances that affected the show are beyond the control of the organizers, Foley pointed out.

The increase in the number and enforcement of cultural property laws might have had a “chilling” effect on people bringing material into the country, Foley said.

The changing look includes the dealer composition, with a handful of new attendees filling slots otherwise unavailable in years past.

The show is locked in through 2021 at the Waldorf-Astoria, but — good news for dealers and collectors who’ve carped about the time conflict with the Florida United Numismatists show — for at least two years, the conflict is abated. In 2017 and 2018 the NYINC show is to be held on the weekend following the FUN show.

“There are a lot of people who want to attend both shows,” Foley said. “It’s not like we’re in competition with each other; we’re just at the mercy of the sites.”

New York is the city that never sleeps, and so it was that auction participants lost some sleep, as bidding for several auctions extended into the late night (or morning) hours of 1 a.m. or so. Attendees and bidders connecting via live bidding technology contested multiple rarities, none more notable than the unique 1897 gold sixpence from South Africa.

The unique 1897 South African sixpence led Heritage Auctions’ NYINC World Coin auction, and was the top lot overall during the marathon of auctions.

The Proof coin was once part of the Royle Baldwin Collection, and has been off the market since the 1930s. The New York auction was its first auction appearance ever. Graded Proof 63 Cameo by Numismatic Guaranty Corp., the coin was estimated to realized $250,000 to $350,000. It realized $329,000, including the 17.5 percent buyer’s fee.

Coin World will report further both in print and online, with additional auction results from the show as well as educational presentations and interviews with attendees.