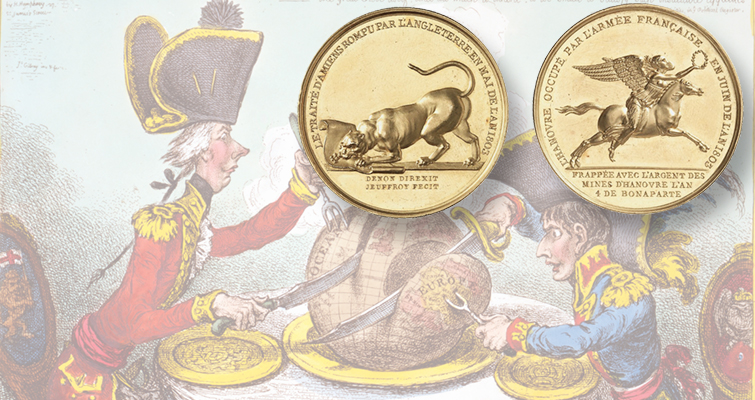 An apparently unique and previously unknown gold version of a medal issued by Napoleon to attack Britain for its 1803 breaking of a treaty will appear at auction in November.

The Treaty of Amiens was supposed to usher in peace in Europe during the Napoleonic Wars; instead, it only put the fighting on hold.

When the British government declared war with France on May 18, 1803, it was just shy of a year since the treaty was signed on May 25, 1802, but only after months of provocation from Napoleon.

When the treaty was broken and the British declared war, Napoleon commissioned a medal to attack Britain’s actions and show the French reaction. An apparently unique and previously unknown gold version of this medal, from the estate of the Bonaparte family, is a highlight of the Nov. 1 auction conducted by London Coin Galleries in cooperation with Fritz Rudolph Künker in Osnabrück, Germany.

The 1803 medal was known in bronze and silver versions, and depicts allegorical representations of France and Britain.

The obverse of the medal shows the leopard, the older heraldic animal of England, ripping a parchment-scroll apart with its claws. An inscription in French translates to: “The Treaty of Amiens broken by England in May of the year 1803.”

The reverse depicts France as the goddess of victory Victoria, in an unusual pose. She rides a galloping horse and holds a laurel wreath in her right hand. Her left arm is wrapped around the horse’s neck, demonstrating her full control of the animal.

The horse is a political reference to Hanover. The French took control of Hanover in June 1803, where Britain’s King George III was prince-elector of Brunswick-Lüneburg (Hanover) in the Holy Roman Empire.

After the treaty collapsed, the British had immediately secured all French and Dutch ships they could capture, and Napoleon reacted by imprisoning all British tourists travelling in France and Italy.

Napoleon also proceeded against the British in the place where he could harm them the most — on German soil. The field marshal in charge of the Hanover territory was completely overwhelmed. He surrendered without a fight and Napoleon had the army disarmed and dispersed.

A legend on the French medal’s reverse proclaims that it uses metal from the mines of the formerly British-ruled territory.

The 1803 medal is one of several such biting, satirical medals issued to promote Napoleon and humiliate the British, including a few other pieces in the same auction. 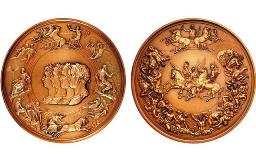 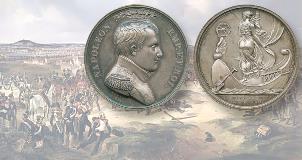