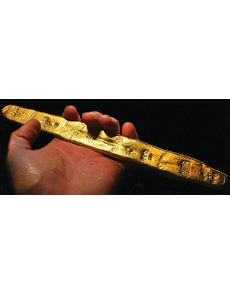 A gold bar recovered from the 1622 Spanish galleon Atocha by Mel Fisher and his salvors led all bidding during Daniel Frank Sedwick’s April 10 and 11 Treasure and World Coin auction No. 11.

The complete Colombian gold bar, weighing 1,061 grams, with the markings of the Sargosa foundry and Pecarta assayer, realized $115,050 with the 18 percent buyer’s fee. The .8959 fine gold bar measures approximately 10.75 inches long and 0.5 inch deep, and bears no fewer than 10 tax stamps from the Atocha, as well as the clear markings for the mine and assayer.

One end of the bar shows marks from chiseling and scooping where the assayer removed pieces of gold for testing. “Overall the bar is remarkably straight and even, very attractive and impressive,” states the lot description. It is accompanied by the photo certificate issued by Fisher and Treasure Salvors Inc. The bar had an estimate of $80,000 to $120,000.

The auction offered 1,524 lots of Spanish colonial and shipwreck coins and other treasure items, as well as ancient and world coins. The auction is also highlighted by the 100-lot Jorge Ortiz Murias Collection of Colombian colonial minor coins, built over some 20 years of collecting.

A buyer’s fee of 18 percent applies, but a 3 percent discount applies for certain payment methods; all prices reflect the 18 percent fee.

According to the firm, more than 92 percent of lots were sold as the firm realized an estimated $1,534,000 with the 18 percent fee.

Mexico, Mexico City, 1714-J gold 8-escudo cob, Royal dies, from the 1715 Spanish Plate Fleet, 27.1 grams, clearly struck from Royal dies “but also evidently struck by hand,” on a typical cob planchet with truncated legends due to planchet thickness and a trace of doubling on the shield side, “a unique hybrid of high importance,” fully Mint State, “choice full shield and crown and cross and date,” $50,150.

Colombia, 1622 gold bar endpiece, 388.3 grams, approx. 2.75 x 1.5 x .625 inches, with markings of assayer/foundry GVSMAN/PAMPLONA, 20.5 karats, from the Atocha, surname is common but consignor “intriguingly attributes this mark to Don Diego de Guzman [as owner] who was a magistrate in Cuzco, Peru, and perished as a passenger on the Atocha,” “presence of encrustation, as small streaks of black on top and white patches in the bubbly pits on bottom,” $28,910.

Colombia, Bogota, Lazareto Leper Colony, 1901 brass 2.5-centavo piece, Krause-Mishler L1 (Standard Catalog of World Coins by Chester Krause and Clifford Mishler), “this denomination by far the rarest in the series, with only about 12 known,” “bold XF with crude rims (as made), tiny spots of toning,” $7,847. ¦