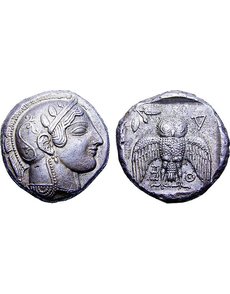 One of the most famous and familiar types of ancient Greek coins, an Athenian silver decadrachm, highlights Roma Numismatics Ltd.’s second auction, scheduled for Oct. 2 in London.

An example of one of the most famous of ancient coin types, the Athenian silver decadrachm, highlights the Oct. 2 auction in London by Roma Numismatics Ltd.

The Athenian decadrachm features a classic design from ancient Greece and is one of about 40 known real examples of the rarity.

The obverse of the decadrachm features a head of Athena wearing an earring, a necklace and a crested Attic helmet decorated with three olive leaves and a spiral palmette. On the reverse is Athena’s owl, facing front with its wings spread, along with an olive sprig in the corner and the abbreviated legend translating to “[coin] of the Athenians.”

Weighing in at a massive 43 grams, the decadrachm was the largest silver denomination ever issued by the city (worth 10 drachmas) and was apparently struck as a special issue.

Silver decadrachms are thought to have been issued to commemorate a battle victory or some other notable event, possibly the city-state’s victory over the Persians at the battle of Eurymedon in 467 B.C.

Once extremely rare, a hoard of Athens decadrachms totaling 13 examples was found in 1984, according to Wolfgang Fischer-Bossert’s 2008 The Athenian Decadrachm. Fischer-Bossert’s follow-up research terms the type of decadrachm offered here as the “avant-garde” style, suggesting that the engravers ignored instructions to design archaizing heads and instead produced this style, influenced by contemporaneous artwork.

All lots are subject to a 15 percent buyer’s fee.

The full catalog may be viewed online at www.sixbid.com, or through the firm’s website, www.romanumismatics.com.