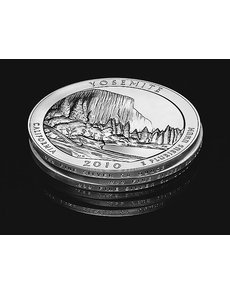 The U.S. Mint plans to maintain the 3-inch diameter for the America the Beautiful silver 5-ounce bullion coins through the end of the program in 2021 despite the Treasury secretary having the discretion to change to 2.5 inches beginning with the 2011 coins.

Production of the 2011 bullion versions has begun at the Philadelphia Mint, but the facility has not started striking the Uncirculated collector versions, Mint officials said Jan. 20.

While the secretary of the Treasury was empowered in 2010 with the discretion to change the diameter of the coins to 2.5 inches from the originally mandated 3 inches beginning in 2011, Mint officials say no diameter change is contemplated for the duration of the program through 2021.

“The flexibilities provided in the Coin Modernization, Oversight, and Continuity Act of 2010 were intended to simplify the manufacturing and development process,” according to a statement released Jan. 19 by U.S. Mint spokesman Michael White. “Prior to the approval of the legislation, the United States Mint had spent substantial developmental effort to achieve product launch in 2010 based on the 3-inch size specifications.

“Additionally, we, as well as our suppliers, have invested money in tooling based on the 3-inch size. To change the size at this time would only cause additional delays and require us to spend additional funds that would have to be recovered, ultimately from the public.

“For these reasons, and to promote consistency, current plans are to maintain the size of the coins struck for the 2010 product throughout the life of the program.”

The U.S. Mint spent nearly a year in research, development, testing and tooling for the bullion quarter dollars, including the acquisition and installation of a special press at the Philadelphia Mint to accommodate production, to meet the mandate of the 3-inch diameter as authorized under America’s Beautiful National Parks Quarter Dollar Coin Act of 2008, enacted Dec. 23, 2008.

During the development of the necessary tooling to apply the incuse edge inscription — .999 fine silver 5.0 ounce — testing of the collars resulted in deformation of the edge. Technicians at the Philadelphia Mint, where development took place and production eventually ensued, were able to rectify the problem.

In response to the initial technological obstacles with the 3-inch diameter, Congress passed the Coin Modernization, Oversight, and Continuity Act of 2010, signed by President Obama into Public Law 111-302 on Dec. 14.

The Mint has not disclosed when it plans to begin offering directly to the public the Uncirculated 2010-P numismatic versions of the 5-ounce coins. The mintage/sales limit is 27,000 of each of the five coins.

U.S. Mint officials said Jan. 20 that all of the Uncirculated 2010-P America the Beautiful 5-ounce silver coins have been struck.

Mint officials limited the mintage figure for each 2010 bullion version to 33,000 pieces. The bullion versions do not bear the P Mint mark of the Philadelphia Mint and were sold through a series of authorized bullion coin purchasers, not directly to the public.

U.S. Mint officials have not announced mintage/sales limits for the 2011 America the Beautiful 5-ounce coins.