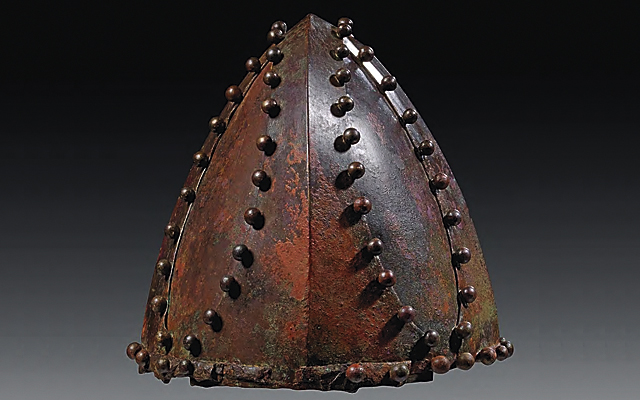 A helmet offered in Gorny & Mosch’s June 25 auction was reported in German media as looted, but the auction firm said it came from a private collection with a provenance back to 2002. It failed to sell. 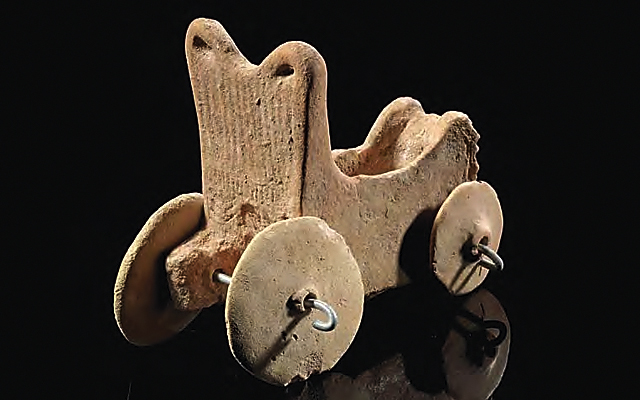 Another item, a clay votive chariot from the third millennium B.C., is also alleged to have been looted, in the disputed report.

A cultural property battle is raging in Germany, and one archaeologist is attacking auction firms and the antiquities trade in general, saying their efforts help finance terrorists.

Auction houses and art dealers are fighting back, though. They say that the issue is grossly inflated, and that such businesses work to ensure proper title and origin of all items they sell.

The same day, broadcaster DW (Deutsche Welle) aired a video interview with Michael Müller-Karpe of the Römisch-Germanisches Zentralmuseum (Roman-Germanic Central Museum) in Mainz. In the DW video, Müller-Karpe is quoted as saying: “The trade in antiquities promotes the destruction of archaeological sites and the information they contain, and it finances terrorism. One needs to be very clear: this market is soaked in blood.”

Qassam Atta, a spokesperson for the Iraqi military, is quoted in the DW video as saying, “One of the ways the Islamic State raises money is through the sale of Iraqi antiquities that are between 2[000] and 3,000 years old. For example, valuable ancient artifacts stolen from Mosul have been sold for large sums of money. These funds almost certainly go to financing the IS.”

RELATED: Can ISIS issues its own coins?

The online report at Das Erste claims that Germany is one of the main hubs for smugglers. The video traces the illicit traffic of antiquities, showing a pockmarked landscape where looting has reportedly occurred, and details how the items enter Germany with “clean” documents, mentioning looting 11 years ago at the National Museum in Baghdad.

The video identifies Munich auction firm Gorny & Mosch, which deals in ancient artifacts as well as coins, as one of the outlets of such stolen goods, a charge the firm vehemently denies.

In a statement from Gorny & Mosch released Nov. 13, the auction firm rejects the accusations made against it in the video.

“We are dismayed to see that a broadcast that is based on such poor and biased a research was to be watched on a broadcaster under public law and that its unsubstantiated assertions have made their way into the [television] news magazine ‘Tagesthemen’ as well,” according to a statement from the firm. “Deliberate false statements and manipulative collages of interviews, case studies that are taken out of context and are out of date, partial witnesses and allegations without evidence make for a mixture that we deem a justiciable defamation of the legal trade in ancient objects.”

Gorny & Mosch singled out the “wrong and fallacious” statements of Müller-Karpe, claiming that the video report was aimed at “cheap sensationalism.”

The firm said that the journalists accepted Müller-Karpe’s statements without skepticism, and that two items shown in the report as allegedly illegally looted — lots 88 and 224 from the firm’s June 25 auction of antiquities — were actually in fact from a private collection.

Incidences of looting shown in the video actually occurred long before the Islamic State rose to power about one year ago, according to Gorny & Mosch and the International Association of Dealers in Ancient Art, a trade body based in London. IADAA also released a statement about the Oct. 20 report, addressing many of the same points raised by the auction firm.

Gorny & Mosch is not among the IADAA’s 32 members in eight countries. However, the firm said that it adheres to severe restrictions regarding antiquities sales, checking the legal provenance of all objects that it auctions.

“We consult the Interpol and the Art Loss Register, and every consignor declares in combination with the consignor’s contract the provenance of a piece. Apart from that, we check every customer — as required by EU law in the framework of the fight against terrorism,” every three months.

In its statement, the IADAA stressed that media should distinguish between the legal and illegal trade, noting that the IADAA has promoted responsible collecting, even requiring members to promise not to purchase or sell objects until they have established to the best of their ability that such objects were not stolen from excavations, architectural monuments, public institutions or private property.

As noted by Gorny & Mosch, European Union laws are already in effect that protect Syrian and Iraqi cultural property to a special degree.

In its statement, Gorny & Mosch noted: “It is important to remember that in Europe, and most of all in Germany, ancient objects from the Near East have been collected for centuries. In accordance with German law, these objects are in Germany entirely legally and can be traded without any restriction.”

In an email interview with Müller-Karpe, he told Coin World that firms that sell coins and other antiquities without documented provenance and an identification of the location the coin was found provide the incentive for looting.

“Looters, including those organized by the IS terrorists will only continue their destructive business as long as no-questions-ask-dealers like Gorny & Mosch guaranty that looted artefacts have a market value,” Müller-Karpe said. “Investors in coins and other antiquities without valid legal documentation of the country of origin must face the fact that they might finance the knifes which behead American hostages.”

Gorny & Mosch and the IADAA questioned the qualifications and veracity of Müller-Karpe, and the report and the timing of it.

Müller-Karpe was criticized for directing the seizure of five ancient vessels (which were obtained legally in the 1980s), according to a 2010 statement from the German Arbeitskreis Kunsthandel (task force art trade) and a 2014 statement of Gorny & Mosch.

In 2008, at the direction of Müller-Karpe, police in Germany seized the vessels from an unnamed dealer in Frankfurt, who successfully sued the government for the return of the items. In 2010, the seizure was rescinded and the Frankfurt district court labeled Müller-Karpe’s actions as “grossly and evidently illegal,” and “close to mental confusion.”

The Das Erste video reported that the illegal antiquities trade in Germany is a $6 billion to $7 billion industry, based on INTERPOL and UNESCO numbers.

However, a study by the IADAA suggests that the annual sales turnover of all European and North American auction houses and antique dealers is only between 150 million and 200 million euros ($186.8 million to $249 million U.S.).

The IADAA notes that the Das Erste estimate would suggest that the illegal trade volume is 30 to 40 times the legal trade. The IADAA infers the number was arbitrarily assigned.

Gorny & Mosch said the firm knows of no sale in Germany of any material proven to have been looted by ISIS.

“To our knowledge, the cases quoted by the press go back to a time in which the Islamic State did not yet have the power to control plunderings,” the firm said. “To declare objects products of illicit excavations solely because of their origin in the Middle East bespeaks ignorance and belies scientific research ethics.”

The report comes at a time when the German government is considering reviving cultural property protection legislation, the auction firm said, and the report is “designed to place members of parliament under pressure to toughen an international model regulation to an extent that allows neither legal trading nor legal collecting in Germany,” said the auction firm.

Gorny & Mosch announced that it is taking legal action, but did not detail the scope and target of that litigation.

Hubert Lanz, who operates Numismatik Lanz, an auction house and coin dealership with a strong online presence, said, blaming “ISIS is just a tool to stop the trade in any collectibles.”

Lanz called the television report “defamation of the whole trade and the collecting world.”

Ulrich Künker, who operates another large German auction firm, Fritz Rudolph Künker, told Coin World via email that he was “shocked how unprofessional and how shortminded the main German TV channel is following the opinion of one (!) archeologist,” referring to Müller-Karpe.

Though Künker is not at the center of the story, Ulrich Künker questioned the report, noting that ISIS has been active mostly during the past one year.

“The companies involved are in business for 40 and more years. How did they do business before? It is common knowledge that the IS [owns] oil-fields. Who is buying the oil? Is this criminal as well? ... I just do not see those guys digging for cultural objects in the desert. I think they have other business to deal with,” he said. “In my eyes, this is all made up by archeologists.”

Müller-Karpe said he is not against owning coins, but is concerned with how they are acquired.

“If their price is the irreversible destruction of the still [undeciphered] archaeological archive in the ground — and beheaded American hostages — this price is too high,” he said.