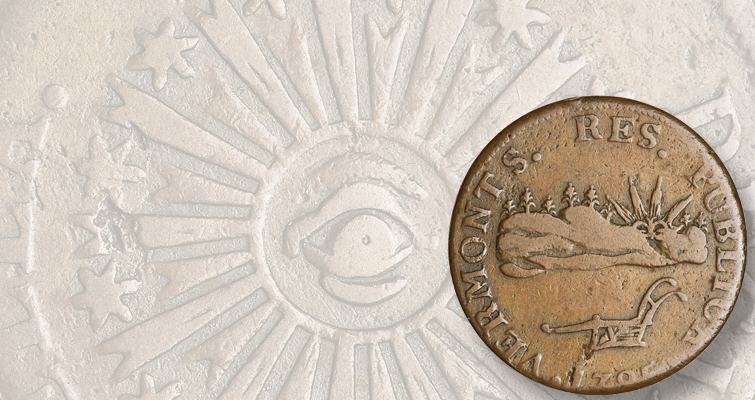 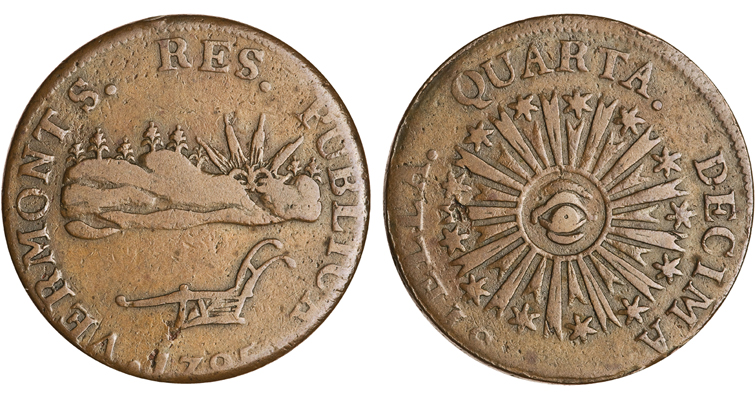 This 1785 Vermont copper, Ryder 2 variety, has been in the American Numismatic Society collection since 1912 and is one of the coins Q. David Bowers studied as a teenager in the 1950s.

The Joys of Collecting column from the July 11, 2016, Weekly issue of Coin World:

In recent weeks I have been discussing the history of the American Numismatic Society, last week ending with 1930 and the doubling of the temple-like museum space for the ANS, on Audubon Terrace in New York City.

In 1958, at the age of 19, I was elected an ANS fellow, an honor I cherish to this day. I made many trips to Audubon Terrace, where I was always greeted warmly. I would pick out favorite series — Vermont copper coins of 1785 to 1788 topped the list — and would be given a tray with the coins on hand. I would retire to a nearby room, and with glass in hand would examine them carefully.

Patterns were another interest as were Hard Times tokens and Civil War tokens. I could name others.

Although it was the American Numismatic Society, the vast majority of staff and contributor scholarship was devoted to foreign and ancient coins, and still is.

In actuality, probably American Federal and Colonial coins and related items comprise less than 5 percent of the numismatic varieties of coins, tokens, medals, paper money, and periodicals in existence. Thus the emphasis is well-placed.

Margo Russell (editor of Coin World) and Harry W. Bass Jr. became councilors (trustees) in the late 20th century. Due to their efforts and those of others, American items, though still in the wings, were increasingly showcased. Each year a special Coinage of the Americas Conference was held in New York. I was among those who presented programs and papers.

Harry Bass served as president, and along the way sponsored the society entering the computer age — perhaps the leading edge among every numismatic group worldwide.

Donald G. Partrick, a specialist in American coinage, became prominent in the ANS and affected its future dramatically.

In the meantime, Audubon Terrace, once in the center of an area of New York City high society, was experiencing poverty and increased crime.

A visitor to the ANS was robbed as he walked to nearby Broadway to hail a taxi. “Be very careful when you leave” was a warning given by staff members.

Some of us learned to be sure, in the winter, when daylight hours are fewer, to leave by four in the afternoon.