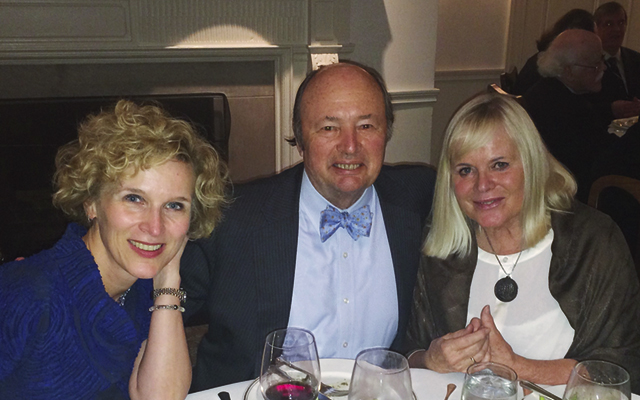 Ute Wartenburg Kagan, executive director of the American Numismatic Society, with John Adams and Regina Adams, at the ANS fete in his honor.

I had planned to continue my comments about my coin-buying travels in Europe 50 years ago, but then a special event intervened.

The memorable event held at the Massachusetts Historical Society in Boston on April 26 trumps my adventures overseas, at least for the time being. Honored was John W. Adams, one of our hobby’s greatest figures.

The sponsor was the American Numismatic Society. The occasion was for Ute Wartenberg Kagan, executive director, and board chairman Kenneth L. Edlow, to present Adams with the Archer M. Huntington medal in recognition of his outstanding career contributions to numismatic scholarship.

On view at the Massachusetts Historical Society’s reception rooms were some of the books John had written and an exhibit of Comitia Americana medals made to the order of Congress. John and curator Anne E. Bentley were co-authors of the standard book on this subject.

In today’s numismatic world there is much emphasis on the market. Most players in the coin game arrive with the expectation of making a profit, spend most of their available money quickly, tire of the novelty, and leave. This causes a fairly rapid turnover.

However, it has been said, and with some justification, that once a collector stays with the hobby, he or she stays for life.

If someone begins as a youngster, the case for longevity in the hobby is even stronger. Born in 1936, John Adams began in numismatics at the age of 9! His first effort was to fill in Whitman folders for Lincoln cents.

From there, he went on to buy Indian Head cents in duplicate quantities for two cents each (more is better, he thought at the time), then on to other specialties, later mentored by Philadelphia dealer David M. Bullowa. Fast forward to today. As a retired financial executive of great accomplishments, he still loves numismatics.

The Adams Fest, and it can be called that, then moved via chartered bus to a dinner at the Brookline Country Club, where John and his wife, Regina, hosted more than 50 guests from all over the country. Joel Orosz was master of ceremonies. It was figuratively a gathering of numismatic eagles. Nearly everyone there had spent many years in numismatics — in research and scholarship, in publications and exhibitions, and more. In six hours of camaraderie I did not hear the words “grade,” “price,” or “market.”

John’s fete was a reality check on how wonderful numismatics is! It was super exciting and inspiring to me.