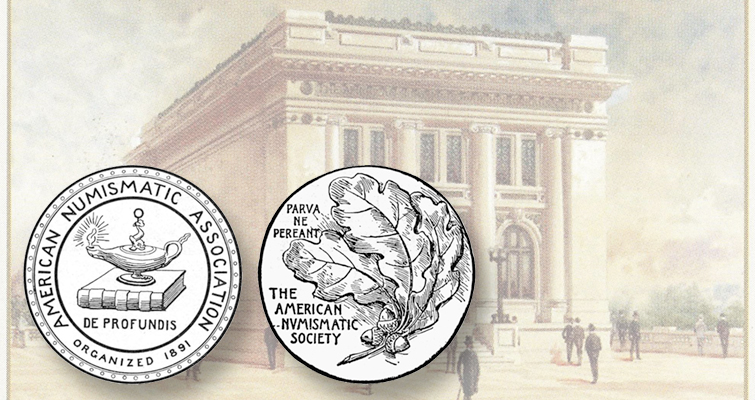 A merger was once considered by the American Numismatic Association, which had no headquarters building in 1920, while the ANS had a grand structure in New York City.

The Joys of Collecting column from the June 27, 2016, Weekly issue of Coin World:

In 1920, the American Numis­matic Society implemented cost-saving measures. The American Journal of Numismatics was discontinued. Today, back issues of the publication, started in May 1866, are available to read on the Internet as a rich source for historical information.

In 1920, The Numismatic Notes and Monographs series was launched in small format booklets published occasionally by the ANS.

In January of that year the United States Coin Committee of the ANS issued a report stating that while prices of goods and services had increased sharply during World War I, the values of coins, tokens and medals had increased only slightly.

The society soldiered on. It did not hold conventions, report on the marketplace, keep up to date on coin mintages, or otherwise engage in the popular aspects of coin collecting. The American Numismatic Association, the sister organization, took care of that. Ironically, its magazine, The Numismatist, included news of the ANS as a regular feature. ANS finances remained a large problem.

At the annual ANA convention held in Chicago in August 1920, discussion was broached on the possibility of merging the two organizations. The ANS had a large building on Audubon Terrace in New York City, while the ANA had no such facility. ANA matters were handled by correspondence by the various officers who worked from their homes. Such a merger, if the ANS would agree, would seem to have benefits for both organizations.

Moritz Wormser (who later would be elected as president of the ANA) stood up and spoke:

“I have given that matter a great deal of thought and possibly can answer very briefly and to the point. I think the functions of the two societies are entirely different. The American Numismatic Society runs its museum, and they don’t want to give up control of their large and valuable collections, buildings, and everything they have. It is really a society of art members. They are not a national organization at all. Of course they want as many members as they can get, but I have always looked on the American Numismatic Association as a federation of local clubs and societies. I think, as such, it has a good function if it stays just where it is.”

That settled the matter. More about the ANS next week.