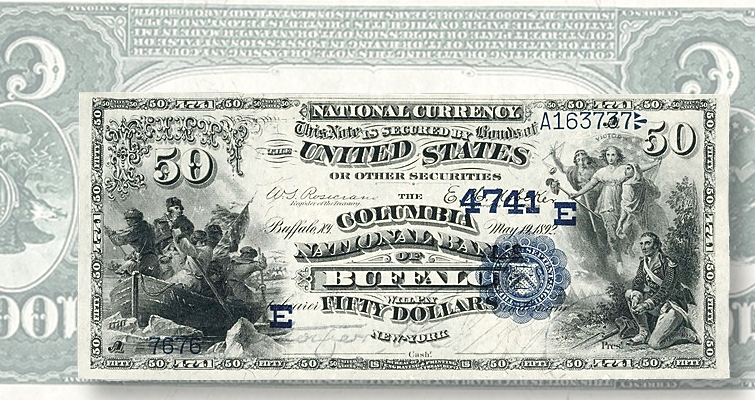 The top result in the entire auction by Lyn Knight Auctions was the $49,350 paid for a $50/$100 double-denomination Date Back (Friedberg 559) from the Columbia National Bank of Buffalo (New York). 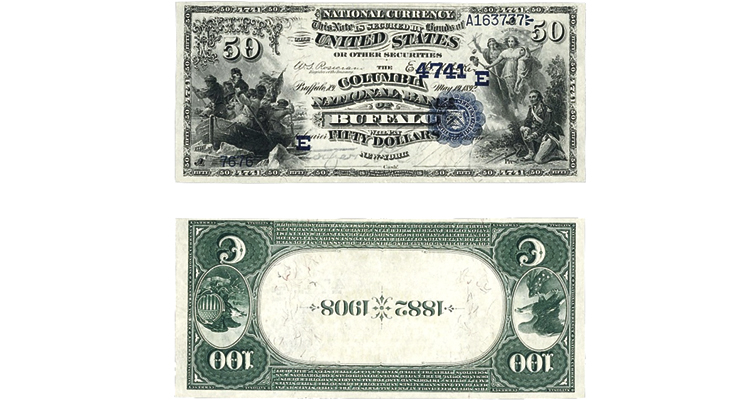 With a "face" value of $50 and a back value of $100, this error note's value well exceeds both, as this national bank note (Friedberg 559) from the Columbia National Bank of Buffalo (New York), graded PCGS Currency About New 50, brought $49,350 at the IPMS in June.

The International Paper Money Show, organized by Lyn Knight, was held from June 13 to 16 in Kansas City, Missouri, for the third time since it ended a 40-year run in Memphis, Tennessee.

Even though, as dealer Fred Bart said, “The number of dealers and attendees has contracted, consistent with major shows nationwide,” the show continues to be the leading forum for paper money collecting in all its forms in the United States. It is one where the collectors and dealers who attend come to do business, and as Bart added, to renew long unseen acquaintances.

Public attendance was hampered somewhat by horrible weather in the Midwest, but world paper dealer William M. Rosenblum echoed Bart’s sentiments. He called it a very good show for him, in part thanks to a consignment of fresh material. Most of his sales were to dealers, but some of the collectors he saw were ones he has known for decades.

There were over 50 dealers with tables, including an international contingent. Lyn Knight Auctions held three sales sessions. The world paper portion on June 13 featured a number of lots that soared beyond their expectations.

The two sessions devoted to United States currency included many error notes, a selection of early small-size uncut sheets, a fair number of small-size packs of a hundred notes each, and the expected assortment of national bank notes

The top result in the entire auction was the $49,350 paid for a $50/$100 double-denomination Date Back (Friedberg 559) from the Columbia National Bank of Buffalo (New York). PCGS Currency graded it About New 50.

The Educational Speakers Series is always an IPMS highlight. As usual, sessions presenting mostly new research were held continuously on Friday and Saturday starting at 10 a.m. The most significant this year was Nick Bruyer’s presentation of his research on “The First U.S. Demand Note.”

As a result of his extensive research on the Panic of 1837, the author makes a convincing argument that some pre-Civil War Treasury notes circulated as currency. The Treasury notes of 1837 to 1843 were issued because the coins were disappearing from circulation, and the government was running out of the money needed to function.

The notes were split into two classes. The first offered a high interest rate and was targeted at investors. The second, instituted by Congress over fierce objections, had a low, or nominal interest rate, and were payable to bearer. In effect, Bruyer says, the latter were effectively “a circulating paper money to help alleviate the severe coin shortage.” These $50 and $100 notes were used to pay government suppliers and employees, the military and even members of Congress two decades before the demand notes of 1861, the oldest currency still legal tender.

Topics of other talks included emergency paper money of World War I and their counterfeiters, obsolete notes, money issue by neutral nations during World War II, and Japanese puppet banks in China.