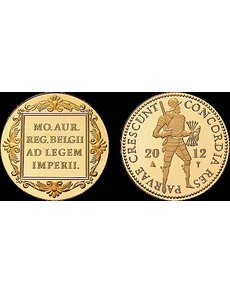 The annual Dutch gold ducat, shown, and double ducat collector coins are now available. The denomination is one of the oldest in the world.

The Netherlands’ 2012 edition in a series issue of gold ducats, whose origins date back to 1586, is now available.

Though the Dutch gold ducat was not issued annually during all those centuries, and its designs have changed slightly, among world coins it wins the award for longevity, being one of the oldest in the world still issued.

What began as a trade coin is now a collector’s item.

Collector versions for 2012 were released Sept. 20.

In 1986, upon the 400th anniversary of the ducat, the Royal Dutch Mint began issuing collector versions of the ducats and double ducats almost annually (none were made in 1987 and 1988).

The modern ducat and double ducat coins are minted in Proof with frosted relief and a mirrored background. The obverse shows the same design as appeared on a 1586 coin, and the reverse shows a modified motto design introduced in 1814.

The ducat remained even after the euro phased out the Dutch guilder on Jan. 1, 2002. The Dutch gold ducat, once minted in the millions, is now limited to mintages in the thousands.

Both 2012 coins are presented in an updated wooden case with a newly designed certificate of authenticity.

For more details, or to order, telephone the distributor at 800-421-1866 or visit its website at www.coin-currency.com. ¦