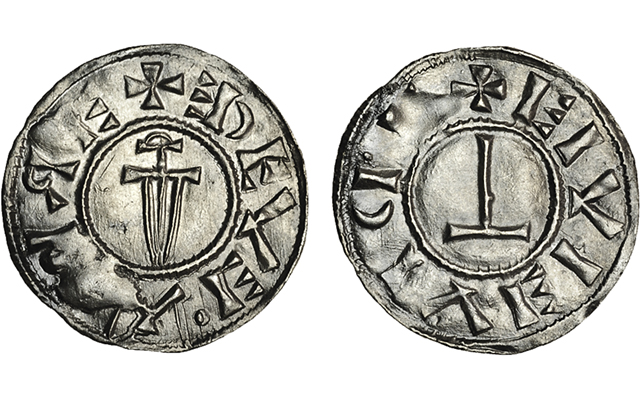 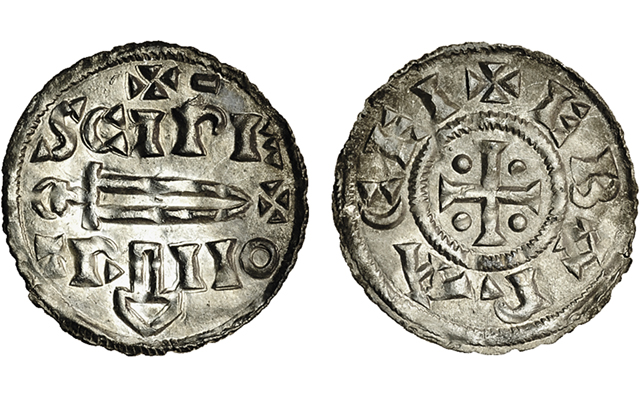 The Eboracum (Ryedale) hoard of Anglo-Saxon and Viking pennies, hack-silver and silver ingots is going to be offered at auction on March 25 and 26.

This remarkable hoard of 65 coins and four ingots gives a fascinating insight into the power struggles of the northern Danelaw and Aethelstan’s subsequent recapturing of York from the Vikings in A.D. 927.

We see on the coins a fascinating mix of the different cultures and religion prevalent in 10th century England. The catalog cover coin, lot 479, is a particularly good example to illustrate this point. This Viking piece shows both the Christian cross and Thor’s hammer on the same coin.

Other coins in the hoard, such as lots 481 to 492, juxtapose the name of Saint Peter ‘Sancti Petri Moneta’ with a large Viking war sword. Here on the coins is the fusing of cultures which helped shape British history and formed our national identity.

In July 927 Aethelstan took the kingdom of Northumbria and styled himself Rex Totius Britanniae, King of all England. Coins with this title, the first occurrence in British history, are represented by lots 455 to 466 and 473 to 478.

At York a significant effort was made to remove all trace of Viking coinage and replace it with Aethelstan’s own. The ‘Church’ type is the first to be struck at the northern stronghold of York and is represented by lots 442 to 453 and lots 467 to 472.

It is generally accepted that this type depicts an Anglo-Saxon church but some believe that it may even be the earliest depiction of York minster itself.

It is these impressive Church type coins which give the name of York in its Latin form, "Eboracac," rather than using the Saxon name "Eoferwic." This played a large part in the naming of the Eboracum hoard.

Eboracum, as a reference tool, will give both numismatists and historians a valuable snapshot into this rich and turbulent period of English history. The composition of the hoard is such that both Viking and Anglo-Saxon identities are juxtaposed and presented in their rawest form. Dispersal of such an important historic article as the Eboracum hoard should not be taken lightly and those at Spink are proud to undertake this task.

For more information about the auction, visit the Spink website.