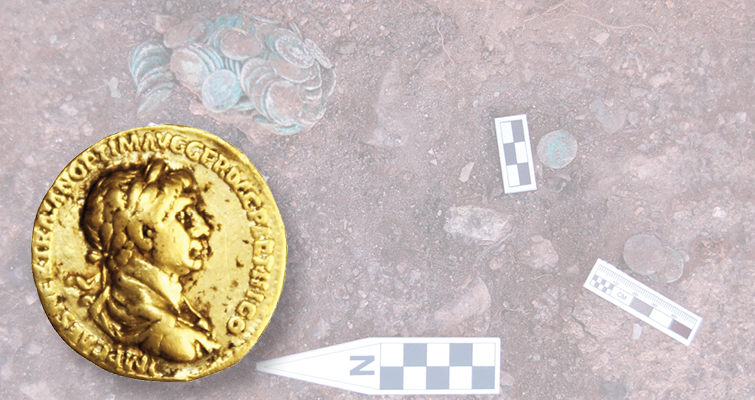 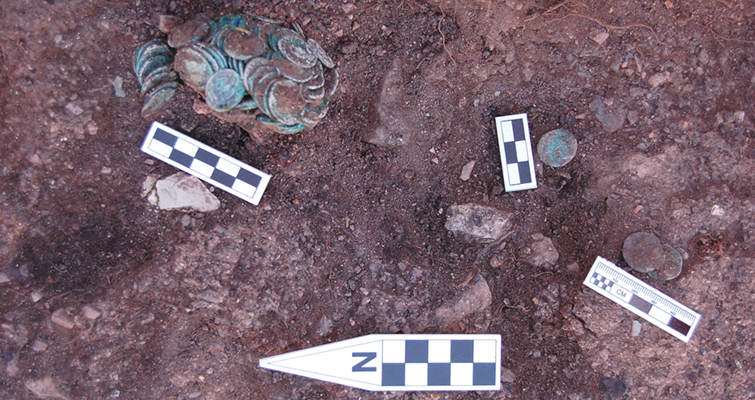 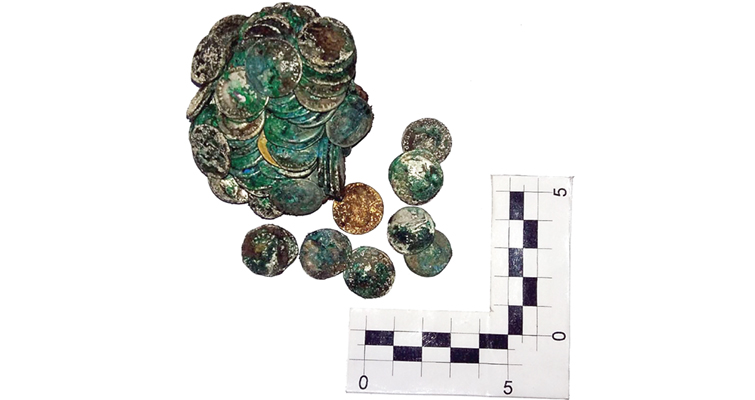 A ruler provides some sense of scale for the silver and gold coins found in southern Spain during an archaeological excavation July 3 in a mine facility.

Treasure in the form of ancient Roman gold and silver coins has been found at a mining site in Huelva, southern Spain.

The discovery is of “incalculable value and a milestone in the archaeology of this mining area,” according to the archaeologists from Atalaya Mining, the company operating the mining area where the coins were found.

The discovery contains approximately 40 to 50 silver and gold coins dating to the late first century and early second century A.D., from the era of Roman emperors Nero, Trajan and Vespasian.

The discovery took place on July 3 while company archaeologists were working on excavating a Roman-era structure inside the mining facilities, according to a statement released by the company to Coin World in September.

Luis Iglesias, director of archaeology at Atalaya Mining, and Juan Aurelio Pérez Macías, professor at the University of Huelva, led the archaeological efforts at the site. The mining area has been “exploited since time immemorial and ... had a great splendor in Roman times,” according to a translation of the Spanish statement from the company.

The coins were a considerable sum when they were cached, indicating that the person who concealed them was a person of relevance within the ancient city of Orium in the Rio Tinto region. The area is named for the Rio Tinto, a river long known for its red coloration resulting from the acidic, iron rich chemistry of the water and near which mining has taken place for centuries (and which inspired the name of the Rio Tinto Group, a mine owner previous to Atalaya Mining).

Besides the value of the coins, their discovery has offered something else of incalculable value, new information.
“Thanks to this finding we can prove that the city continues farther west than we previously thought,” the company said.

Most of the coins in the find are silver denarii, but at least two gold aureii were part of the cache. The firm suggests that archaeologists will not know when the coins were buried until further research is conducted, but that the hoard may have been hidden during the time of the emperor Marcus Aurelius, as the Baetica region was under assault from invaders from North Africa.

A financial crisis and plague exacerbated the threat, and certain towns were abandoned for more than a century.

The coins were found bunched together because, probably, they would have been held in a leather purse when cached, according to Spanish news reports.

Archaeologists discovered the coins as they were placing a metal sheet to protect a site that has already been identified as rich in Roman remains. The excavations are being funded by the local province, and the latest haul of found coins will remain provisionally on display at the Mining Museum in Minas de RioTinto until a permanent place for them is established.

A separate find of 600 kilograms of bronze Roman coins occurred in Seville in April 2016.