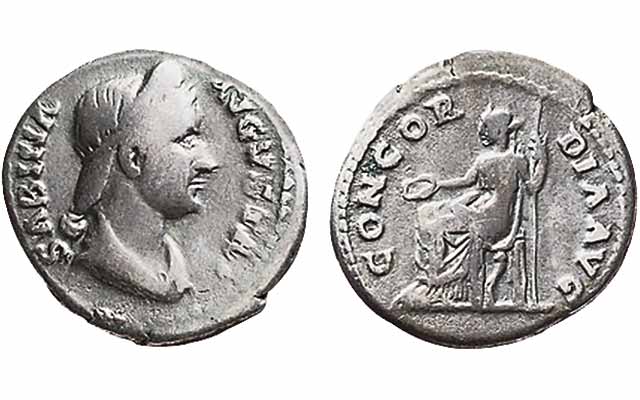 Sabina, the wife of Hadrianus, appears on the obverse of this eminently affordable silver denarius of ancient Rome. The circa A.D. 128 to 126 coin marks her elevation to the title Augusta.

Though the number of American coins showing historical women is notably limited, ancient Roman coins are a series known for featuring an abundance of female figures.

One such coin, depicting Sabina, the wife of Hadrianus, was sold in Schulman B.V.’s July 3 sale.

The circa A.D. 128 to 136 silver denarius of Rome features the ruler’s wife on the obverse and Concordia, seated, on the reverse.

Sabina was the daughter of Salonia Matidia and a grandniece of Trajan.

She married Hadrian in A.D. 100. She accompanied him on most of his journeys but their marriage was an unhappy one. She was granted the title of Augusta in A.D. 128 and died in A.D. 136, preceding her husband by about 18 months.

A special coinage, including this piece, was issued to commemorate her consecration.

To learn more results of the sale, visit the firm website.

Want to know more about Roman coins? Coin World reports on them frequently!