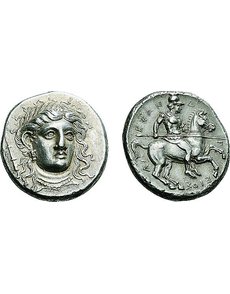 A silver stater from Thessaly established a new record price for a coin of its type in a May 10 auction, bringing 684,400 Swiss francs ($781,546 in U.S. funds), including the 18 percent buyer’s fee. The circa 369 to 358 B.C. coin was issued under the despotic Alexander of Pherai in ancient Greece.

A silver stater from Thessaly established a record price in Nomos AG’s May 10 auction.

“The sale was enormously successful. I have never, ever, seen prices even vaguely like those in this sale,” said Nomos Director Alan Walker.

“It is probably a record price for a silver stater too. ... [T]his sale is just jam packed with record prices,” Walker said.

Walker said the stater and the other coins in the BCD Collection “were the best coins of their types that had ever been assembled. Thus there were world record after world record for the coins it contained.”

The anonymous consignor, who has been selling other parts of his collection over recent years with several different auction houses, wrote in the catalog, “There isn’t much one can say about this stunning coin, it speaks for itself.”

Walker, who called the coin “a truly magnificent work of art,” said the winning bidder, who will not be named, was a collector on the floor.

“There were at least two very, very serious people who wanted it. ... We believe the coin will ultimately be placed in a museum collection for display,” he said.

When it was auctioned by Giessener Münzhandlung April 3, 1989, the silver stater of Thessaly realized a hammer price of 180,000 German marks, then the equivalent of approximately 165,000 Swiss francs or $106,325 U.S., Walker said.

The hammer price for the lot in the May 10 auction was 580,000 francs, or three times the hammer price of 22 years ago. It could have brought an even higher bid.

“We believe that if the phone bidder had decided to go higher he would still have been outbid by the person on the floor,” Walker said.

The 12.07-gram coin depicts Thessalian goddess Ennodia on the obverse; an armored Alexander carries a lance while riding a horse on the reverse of the coin.

The coin is lightly toned and in Extremely Fine condition.

Alexander of Pherai was one of the sons of the tyrant Jason, who was murdered by conspirators in 370 and was succeeded by his brother Polydoros, who was, in turn, murdered by another brother, Polyphron.

Alexander, the nephew of Polyphron, murdered him in 369, and embarked on a rule of oppression and tyranny.

His rule was marked by many battles and cruelty toward his own people; finally his wife, Thebe, who hated his cruelties, convinced her brothers to kill Alexander.

Though the coin established a new record price, Walker pointed to other results as more astonishing.

“There was nothing like the prices for silver fractions ever before,” he said.

For more details about the auction or the company, visit the website, www.nomosag.com, email the company at info@nomosag.com or write to it at Nomos AG, P.O.B. 2664, CH 8022 Zürich, Switzerland. ¦