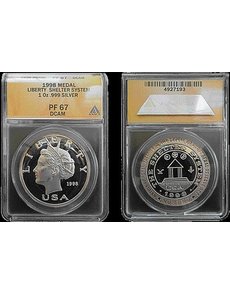 Collectors are submitting Liberty Dollar medallions for third-party certifications and encapsulation. ANACS has been grading the medallions “for some time,” according to Paul A. DeFelice, ANACS’s vice president for marketing and client relations

Collector David Maudlin said he began submitting the silver Liberty Dollar medallions to ANACS in the fall of 2013 because he wanted lasting protection for the medallions and professional confirmation of the quality of the struck pieces.

Ron Goodger, who has bought and sold Liberty Dollar medallions for years and extensively documented all Liberty Dollar releases, said third-party certification is driving the prices up for quality strikes. Although Goodger has his own extensive collection of Liberty Dollars, so far he has not submitted any of his pieces for professional grading and encapsulation.

“Getting the door opened to quality grading is a big step for Liberty Dollar collectibles in my estimation,” Goodger said. “In the end, it will flesh out the final difference between a true gem collectible and run of the mill pieces.”

ANACS is certifying each Liberty Dollar medallion as a “token”; the grading labels inserted within the plastic holders identify the Liberty Dollars as such.

“ANACS has been certifying NORFED Liberty Dollars as tokens for quite some time,” DeFelice said. “In fact, we welcome many privately struck medals and tokens, from Civil War Tokens and storecards to modern fantasy pieces.

“As an example, most recently, we have been receiving a significant number of physical Bitcoins for certification. We understand some of these tokens are the topic of controversy.

“In the case of the NORFED Liberty Dollars, our certification is in no way an ANACS endorsement of this silver round as an alternative currency. ANACS is simply providing a description and our opinion on the condition of the token, and fulfilling a customer need. We always reserve the right to refuse the certification of any coin, medal or token for any reason, at any time, but for now we are comfortable grading Liberty Dollars,” DeFelice said.

The Liberty Dollar was introduced as a “private, voluntary barter currency” in 1998 by monetary architect Bernard von NotHaus under the umbrella of NORFED, the National Organization for the Repeal of the Federal Reserve and the Internal Revenue Code.

NORFED continued until December 2006 when the entity was dissolved and re-emerged as Liberty Services, doing business as Liberty Dollar.

Since that seizure, the secondary market for Liberty Dollar issues has risen dramatically.

Von NotHaus was convicted March 18, 2011, in federal court in Statesville, N.C., on charges of making coins resembling and similar to United States coins; of issuing, passing, selling and possessing Liberty Dollar coins; of issuing and passing Liberty Dollar coins intended for use as current money; and of conspiracy against the United States. Von NotHaus is still awaiting sentencing.

Meanwhile, prices for many Liberty Dollar issues, especially those with limited mintages, continue to rise in the secondary market.

More details on Liberty Dollars can be found on Goodger’s website at https://sites.google.com/site/ronsnorfedsilverlibertys/. ¦