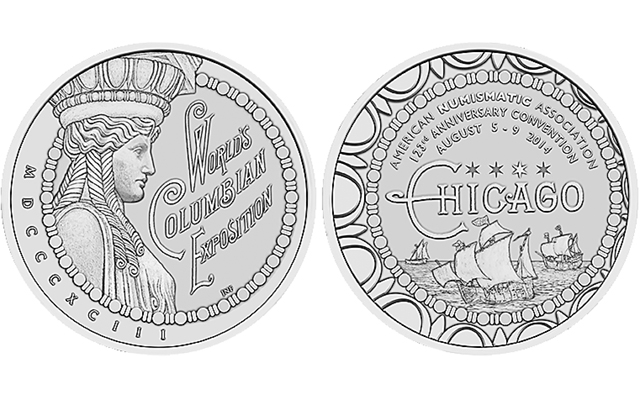 The American Numismatic Association’s 123rd Anniversary Convention medal honors the 1893 World’s Columbian Exposition in Chicago, where the 2014 World’s Fair of Money will be held.

Another summer, another commemorative medal from the American Numismatic Association.

The ANA’s 123rd Anniversary Convention medal will pay tribute to the 1893 World’s Columbian Exposition in Chicago, the city that will host this year’s ANA World’s Fair of Money from Aug. 5 to Aug. 9.

The medal’s obverse features the inscription WORLD’S COLUMBIAN EXPOSITION and MDCCCXCIII, which is 1893 in Roman numerals, and JNF, the initials of designer Jamie Franki. The inscriptions flank a profile of one of the sculptured female figures that serve as exterior columns, known as caryatids, at Chicago’s Museum of Science and Industry.

That building is part of Chicago’s “museum campus” along Lake Michigan that was originally built as the fairgrounds for the World’s Columbian Exposition.

On the ANA medal’s reverse are Columbus’s three ships — the Nina, the Pinta and the Santa Maria — along with the inscriptions AMERICAN NUMISMATIC ASSOCIATION, 123RD ANNIVERSARY CONVENTION, AUGUST 5-9, 2014, and CHICAGO.

The four stars of the Chicago flag are also portrayed on the medal’s reverse. The third star from the left, which represents the 1893 exposition, is brightened.

Franki, a University of North Carolina at Charlotte art professor, designed the reverse of the 2005 American Bison 5-cent coin and the obverse portrait of Thomas Jefferson on all 5-cent coins struck in or after 2006. He has designed all but one of the ANA anniversary medals since 2008, when he depicted Edgar Allen Poe for the Baltimore World’s Fair of Money medal. Other topics he’s portrayed are Paul Revere’s “Midnight Ride” for the 2010 Boston World’s Fair of Money, and the 1812 Battle of Fort Dearborn for the 2011 convention that was also in the Chicago area.

“They’re very different but each one is supposed to reflect something about the history of the city and [contain] some tie to numismatics,” Franki said of his different designs.

The numismatic tie-in for this year’s medal is the 1893 World’s Columbian Exposition theme, which was the subject of the U.S. Mint’s very first commemorative coin.

“I’m very pleased with the medal,” the designer said. “I think it combines classicism and asymmetry in an interesting fashion.”

Here are the available medal varieties and prices, according to the ANA:

To order, call the ANA at 800-514-2646. Medals will ship on July 31 and pre-orders will not be available for pickup at the World’s Fair of Money, which will take place at the Donald E. Stephens Convention Center in Rosemont, Ill.