ANS publications available in digital and print formats in 2015 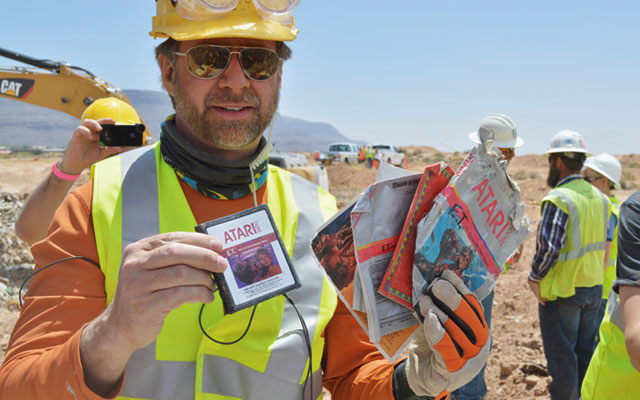 Andrew Reinhard was part of the team of archaeologists who participated in the 2013 excavation of the famed "Atari Burial Ground" at the Alamogordo, N.M., dump.

Beginning in 2015, the ANS Magazine will appear for the first time in both print and digital editions. The same is true of all forthcoming monographs and the American Journal of Numismatics.

Andrew Reinhard, the new director of publications at the American Numismatic Society, is managing that process. Reinhard began his duties at the ANS in December 2014.

“We’re not doing away with print,” Reinhard said. “Far from it. The goal in going digital, however, is to give readers as many options to access scholarship as possible. Producing eBooks and a digital edition of the magazine and journal make information both searchable and portable.”

Reinhard graduated with an master’s degree in archaeology and art history from the University of Missouri – Columbia in 1996, and has excavated in Greece, Italy, Illinois, and Kansas. He most recently led the excavation of the “Atari Burial Ground” in Alamogordo, N.M., for the documentary film, Atari: Game Over and has a television series in development on media archaeology.

His research into video game numismatics and virtual currency will appear in ANS Magazine 2015.1.

He was also accepted to the archaeology doctorate program at the University of York where he is writing about the intersection of archaeology and video games.

Reinhard is no stranger to digital publication. Prior to coming to the ANS, he was the director of publications for the American School of Classical Studies at Athens where he published print and digital archaeology monographs and journals, developed apps for phones/tablets for tourists to use at the Athenian Agora and Ancient Corinth, introduced Google Glass as a serious excavation tool, and made many of the ASCSA’s out-of-print publications available for free as Open Access.

“The previous [ANS] publisher and Deputy Director, Andy Meadows, left everything in excellent shape, and I have been quite fortunate in inheriting a crackerjack team of technologists, editors, and designers,” Reinhard told Coin World. “We’ve already released the Coinage of the Roman Republic Online (CRRO), and are preparing something similar with the ANS’s collection of Seleucid coins for later in the year.”

He said the ANS is in discussions now “about scanning our collection of auction catalogues, linking them to Donum, Archer, and Mantis. I’m also looking forward to the launch of our revised website, and to publishing digital editions of our books, journal, and magazine in 2015.”

“We continue to stress Open Access and Linked Open Data with our Web projects, while building partnerships with platforms such as JSTOR to encourage library access. I’m standing on the shoulders of giants, but that gets us closer to the stars,” Reinhard said.

While he is not currently collecting coins, he said that “as a boy I had an armload of Whitman coin folders that I attempted to fill. As an archaeologist, I’ve tended to see coins more as artifacts that provide context for whatever I’ve been excavating, offering a secure way to date something.”

Now that he is working at the ANS, “I see that there is much more to coins than being an archaeological tool, and am enjoying the wider sense of art, design, history, trade, and economics embodied within each specimen.”

He said he has a “Morgan silver dollar that was given originally to my grandmother as a holiday bonus when she worked at Macy’s in New York City. She never spent it!”

Reinhard said his favorite time period in history “has to be the 6th- to 5th-century BC, especially in Athens. It was really a Golden Age for Greece. I enjoy studying periods of transition when something approaches and finally achieves genius.”

“It might be trite to say so, but I never tire of looking at the Athenian silver tetradrachms, and am fortunate to be able to visit many of them any time I like, courtesy of the ANS,” he said.

Reinhard will be spreading the word about digital and print initiatives throughout the year.

“I look forward to being a part of INC in Taormina, Italy, for the first time, and in showcasing the work of Ethan Gruber, Oliver Hoover, Andy Meadows and others. It’s a privilege to work with such a talented team and to be able to facilitate the delivery of all of these important, ground-breaking tools for anyone to use for free worldwide. I look forward to continuing that strong, progressive tradition.”

On the print side of things, in 2015 the following eight titles will likely appear before year’s end: Medallic Art of the American Numismatic Society (Miller); Kushan, Kushan-Sasanian, and Kidarite Coins (Jongeward and Cribb); Irritamenta: Numismatic Treasures of a Renaissance Collector (Cunnally); Monuments in Miniature (Elkins); Festschriften for Richard Witschonke and Basil Demetriadi; Persian Banknotes (Bonine); and the new edition of Tudeer’s the Tetradrachm Coinage of Syracuse in the period of the Signing Artists (Fischer-Bossert/Wartenberg).

Ute Wartenberg, ANS executive director, commented on Reinhard’s appointment: “The society is extraordinarily fortunate to have Andrew as our new Director of Publications. With his background, he will be able to develop our programs of digital and print publications, which were so well developed under Andy Meadows’ tenure.”

For more information about the ANS, visit the society’s website.