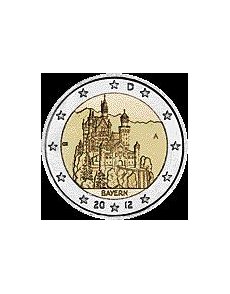 Germany has released the latest coin in its annual Bundeslander series honoring each of the 16 federal states, in 2012 celebrating Bavaria. The design shows Neuschwanstein Castle. Image courtesy of the Staatliche Munze Berlin. 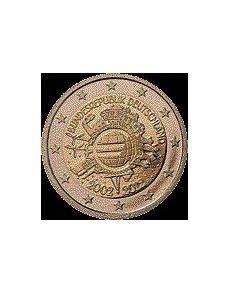 All 17 eurozone nations are issuing a circulating commemorative €2 coin to mark the 10th anniversary of the Jan. 1, 2002, start of euro currency circulation. The design is the same except for the nation’s name, Mint marks and edge inscription. The German issue from Staatliche Münze Berlin (the Berlin Mint) appears here. Image courtesy of the Staatliche Munze Berlin. 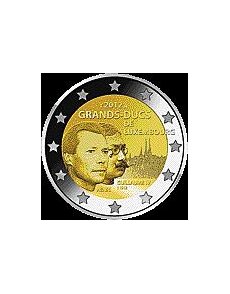 Luxembourg in 2012 marks the centennial of death of Grand-Duke Guillaume IV in 1912 with its circulating commemorative €2 coin. Images courtesy of the European Commission Economic and Monetary Affairs committee.
Previous
Next

Eurozone member nations in early January began placing a commemorative €2 coin into circulation to mark the 10th anniversary of the circulating currency amid concerns for the stability and future sustainability of the euro.

In addition, several issuing nations have confirmed their plans for other circulating commemorative €2 coins for 2012.

The 10th anniversary €2 coins are beginning to enter circulation, though exact release dates have not been confirmed, except Jan. 2 for the coin’s launch in Estonia. The Estonian coin is that nation’s first circulating €2 commemorative since adopting the joint currency one year ago.

The coins for Austria, Greece, Portugal, Slovakia, Slovenia and Spain also reportedly entered circulation in early January, based on sales of the coins through auction site eBay.com, as well as reports from collectors at various websites.

As reported in the July 25 issue of Coin World, the coins feature the same commemorative design except for the name of each
issuing country and the edge inscriptions and Mint marks.

An estimated 90 million €2 coins are being released into circulation across the eurozone bearing a design by Helmut Andexlinger, designer at the Austrian Mint.

The winning design shows a family, homes, ships representing trade, the European Central Bank building to represent finance and a factory to represent industry. Windmills “indicate the forward advances that the euro has made for Europe,” Andexlinger said.

The dual dates of 2002 and 2012 also appear in the design, all of which is contained within the center portion of the ringed-bimetallic coin, surrounded by 12 stars on the ring portion of the coin.

The themes for 2012 circulating commemorative €2 coins in Germany, Luxembourg, Malta, Netherlands, Spain and Vatican City have all been confirmed.

Images of the designs for the coins of Germany and Luxembourg have been released.

Germany continues with the annual Bundeslander series (which debuted in 2006) honoring each of the 16 states of the Federal Republic of Germany. One coin is released annually, coinciding with a state’s presidency of the Bundesrat (a legislative body).

The 2012 coin celebrates Bayern (Bavaria), and shows a famous view of Neuschwanstein Castle in a design by Erich Ott.

The design shows the view from the east as visitors ascend to the castle, with the gatehouse in the foreground and the medieval-style towers and turrets. “The panoramic mountain situated behind the castle is well captured, as the sitting [sic] of the castle on a cliff overlooking the romantic Pöllatschlucht [a mountain stream],” according to a description provided by the European Commission Economic and Financial Affairs committee.

The state’s name appears along with one of five Mint marks (A, D, F, G OR J) signifying the Mint facility that struck the coins.

Thirty million coins are being released for Germany.

Luxembourg celebrates its royalty with a design marking the centennial of the death of Grand-Duke Guillaume IV, who died Feb. 25, 1912.

A portrait of the current monarch, Grand-Duke Henri, is superimposed over a portrait of Grand-Duke Guillaume IV, both facing to the right. An outline of the city of Luxembourg appears in the background.

The rulers’ given names below the portraits identify them, with the 1912 year date appearing below Guillaume IV’s name.

The Mint mark of the Royal Dutch Mint and the initials of the Mint master flank 2012 above the legend GRANDS-DUCS DE LUXEMBOURG (“Grand Dukes of Luxembourg”), which appears above the men and city, all on the nickel-brass center part of the ringed bimetallic coin.

A total of 1.4 million coins are due for release some time in January.

Images are not yet available for the coins from Malta, Netherlands and Vatican City, but the nations have confirmed the themes for their coins.

Malta will release the second coin in a series honoring the Maltese constitutional history; the design in 2012 marks the 125th anniversary of majority representation (1887).

Additionally, Vatican City’s recent release of its 2012 philatelic and numismatic program confirmed that its annual €2 coin will mark the “7th World Meeting of Families.”

Coin World has already reported on the Spanish coin (Oct. 24 issue); that coin, the third in a series honoring Spanish UNESCO World Natural and Cultural Heritage Sites, shows Burgos Cathedral. Eight million of those coins are due to be released March 1.

Though the European Union has 27 member states, only 17 are members of the eurozone, the economic area that issues the euro currency. The reverses of the euro coins feature one of three common designs, with national designs appearing on the obverse, as chosen by the issuing nations.

Each year each nation in the eurozone can (but is not required to) issue one circulating commemorative €2 coin with a design of its choosing.

The €2 coins are ringed bimetallic pieces with a copper-nickel ring and nickel-brass center; each weighs 8.5 grams and measures 25.75 millimeters in diameter. All €2 coins feature the 12 stars of Europe in the ring surrounding a central design.