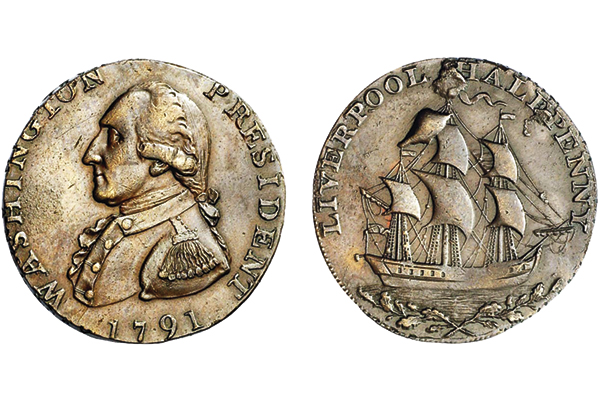 A 1791 Washington Liverpool halfpenny struck and circulated in England bears American-related motifs and is listed in A Guide Book of United States Coins.

In the early 1960s, I made frequent trips to London where I made the rounds of the dealers — Spink & Son, B.A. Seaby Ltd., Baldwin’s, and the newly established Stewart Ward — to buy British, American and other interesting coins for inventory back in New York at Empire Coin Co. Jim Ruddy often traveled with me.

British sellers, generally conservative by nature, probably viewed me has having more money than good sense. In any event, word quickly spread around England that I would make instant decisions, make good offers, and would pay immediately.

Seaby was located in offices one flight up the stairs from the street. Laurence Brown usually greeted me, founder (in 1927) Bert Seaby was sometimes on hand, and staffers were always warm and friendly. I usually headed for Monica Bussell, nicknamed the “Copper Lady,” who had charge of coins, tokens and medals struck in that metal. She always offered a nice selection of Talbot, Allum & Lee, Washington Ship halfpennies, Rosa Americana pieces, and other copper tokens issued in England but with American-related motifs. These were and still are listed in A Guide Book of United States Coins.

I was not the first American to tap the inventory of the Copper Lady. The greatest coup was made by Robert Bashlow, an American dealer who had visited in 1960 and found that Seaby had tens of thousands of Conder tokens, or trade tokens, mainly issued in the 1780s and 1790s, that circulated at the value of a penny. Most of these were in worn grades, say from Very Good to Extremely Fine. Not having any significant individual value to numismatists at the time, they were stored in bulk. Bashlow seized upon them as an opportunity, and bought the entire hoard for sixpence each. No one knew that within a few years these would become wildly popular with British collectors! Probably the typical token would be worth $5 to $10 today, rarities much more.

Each time I visited London, the Copper Lady would have fresh stock. I had two advantages: (1) Coins in high grades were usually called “Good EF.” Some coins were, indeed, no better than an American EF. However, some measured fully up to American standards for Uncirculated. (2) I bought at dealer’s wholesale, adding an advantage. The result was that if I spent £1,000 sterling (about $3,250) I returned home with inventory worth the best part of $10,000.