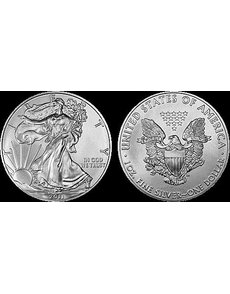 2011 sales of American Eagle silver bullion coins already eclipse 2010’s totals, but by how far when the year ends remains to be seen.

November sales of 1,384,500 coins are the lowest for the year and for any month in more than four years, and a far cry from January’s sales of 6,422,000 coins — the highest monthly sales total since the silver American Eagle was introduced in October 1986.

The U.S. Mint has not struck nor sold any American Eagle platinum bullion coins since November 2008.

November’s sales bring the 2011 sales total to 153,500 coins. No American Buffalo gold bullion coin were sold in January or February.

Monthly sales totals, posted cumulatively on a daily basis by the Mint at www.usmint.gov for American Eagle platinum, gold and silver bullion coins and American Buffalo gold bullion coins, may include coins dated from more than one calendar year and do not represent mintages for a particular date. ¦