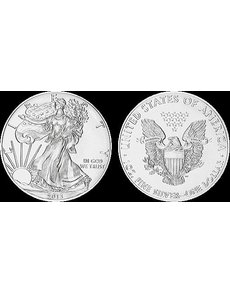 Demand for American Eagle 1-ounce silver $1 bullion coins remains strong, with sales by the U.S. Mint to its authorized purchasers on an allocation basis.

“Overall, we attempt to manage our supplies in a manner that ensures we have a sufficient number of coins to meet the weekly demand of our authorized purchasers,” according to information released Feb. 5 by Mint spokesman Michael White. “When that demand exceeds our ability to acquire a sufficient number of blanks, we then go on allocation until our inventories can be rebuilt again and the supply of blanks increased so that time spent on allocation is minimized,” he said.

From the launch of the American Eagle Silver Bullion Coin Program in November 1986 and for the next two decades, annual American Eagle silver bullion coin sales have ranged from 3 million to 10 million coins.

White said sufficient supplies of raw silver are available for acquisition on the secondary market. The primary production obstacle is securing sufficient planchets to strike both the bullion and numismatic versions of the American Eagle silver $1, as both use the same planchets, he said.

“The situation at our suppliers is understandable. The investment required to establish additional capacity requires careful financial analysis, and the demand from global mints did not exist throughout the early part of the last decade,” according to White. “The United States Mint has worked diligently over the last five years to grow our supply of silver blanks.”

The Coinage Modernization, Oversight and Continuity Act of 2010 (CMOCA), Public Law 11-302, signed into law Dec. 14, 2010, by President Obama, amended the statutory priority between the Mint’s bullion and numismatic programs which use the same blanks to serve their customers.

“Numismatic use of the blanks is considerably less than bullion, but provides an important product in service to our customers,” White explains. “Prior to CMOCA, bullion sales took precedence and all blanks were diverted to bullion operations, forcing the Mint to ignore a key constituency.”

In subsequent years, because of the strong demand, not only has the Mint placed sales to authorized purchasers on allocation, but it has on several occasions suspended sales while replenishing depleted inventories.

For at least the last two calendar years, the Mint has continued production of the current year’s coins through Dec. 31, moving sales for coins of the incoming year to January. ■