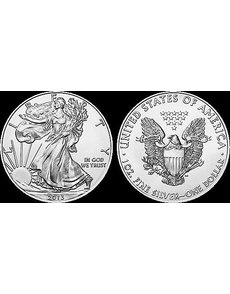 Sales of the .999 fine silver bullion coins totaled 40,175,000 as of Nov. 12. Purchases by the United States Mint’s authorized purchasers of the maximum weekly combined allocation of 500,000 coins established the record. The total eclipses the previous annual sales record of 39,868,500 coins set for all of calendar year 2011.

The record mintage for the American Eagle silver bullion coin is 40,020,000 pieces, for the 2011 coin. Sales figures should not be confused with mintage figures; some of the 2011 coins presumably were delivered in 2012, and thus are recorded in the 2012 sales total, not the 2011 sales total.

Similarly, the 2013 sales total should not be confused with a mintage total. The sales figure could include left-over 2012 coins delivered in early 2013.

U.S. Mint officials announced Nov. 6 that the Mint would issue its last weekly allocation of 2013 American Eagle silver bullion coins on Dec. 9. The authorized purchasers will be unable to place orders for the silver bullion coins for a little more than a month. Placement of orders for 2014 coins is not scheduled to begin until Jan. 14, according to the Mint’s Nov. 6 announcement.

The Mint’s authorized purchasers sell the coins to dealers, other retailers and to the public. For additional comparative sales figures for the program, visit www.usmint.gov/about_the_mint/index.cfm?action=PreciousMetals&type=bullion.