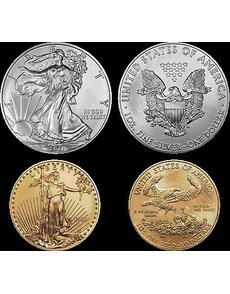 U.S. Mint officials released the final mintages for 2011 silver and gold American Eagles on April 10 after all remaining coins in inventory were recorded as sold.

No records were set among the 2011 American Eagle .9167 fine gold bullion coins. The mintages for all four weights/denominations are:

The mintage for 2011 American Buffalo 1-ounce .9999 fine gold $50 coins won’t be released until the Mint’s remaining inventory is sold to its authorized purchasers. Sales through April 10 reached 202,000 coins.

Monthly sales totals, posted cumulatively on a daily basis on the Mint’s website at www.usmint.gov for American Eagle platinum, gold and silver bullion coins and American Buffalo gold bullion coins, may include coins dated from more than one calendar year and do not represent mintages for a particular date.

Final mintages from 1986 on can be found at www.usmint.gov/mint_programs/american_eagles/index.cfm?action=MintageTotals#2010. ¦