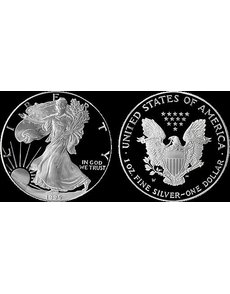 Ian Russell, president and founder of GreatCollections, said April 1 that the unnamed collector who purchased the coin was not seeking to complete a collection of Proof silver American Eagles. The collector had waited years to find a premium example of the key date for the entire Proof American Eagle silver series and was willing to pay what it would take, Russell said.

“This is what happens when you have an extremely popular series,” Russell said. “This collector was determined to win it.”

The winning bidder was one of 21 bidders who placed a combined 104 bids during the auction. The final closing bid was $78,777. The addition of the 10 percent buyer’s fee brought the final purchase price to $86,654.70.

“The 1995-W is the ultimate key to the series with the lowest mintage and is notorious for imperfections, explaining the low percentage graded at the perfect Proof-70 DCAM grade,” Russell said. “In addition to the technical points about the coin itself, the general market for silver Eagles continues to grow at a fast pace ... probably faster than any other coin series at the moment.”

The previous record for any silver American Eagle, also a Proof 1995-W coin, according to Russell, was $40,000 paid for a PCGS Proof 70 Deep Cameo coin offered in a Teletrade auction that closed March 15, 2010.

Part of a set

However, some collectors of silver American Eagles voiced complaints about the silver coin from the West Point Mint being made available only in a set that they could not afford. The complaints mostly focused on the point that their collections, inexpensively maintained as complete through 1994, were no longer complete because they could not pay the original or secondary prices for the special coin.

How many of those 1995 sets remain intact is unknown, as sets have been broken apart over the years, with the gold and silver coins dispersed separately.

At the time of release in 1995, purchasers who acquired a five-coin set solely for the Proof silver American Eagle it contained paid a net cost of roughly $200 for the silver coin. At the time, the gold coins were worth not much more than their melt value of roughly $800.

For more information, email Russell at ian@greatcollections.com or contact Russell by telephone at 949-679-4180. ¦