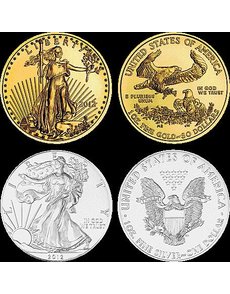 Despite the month-to-month increase, September sales were the lowest for that specific month since 2007. September 2007 American Eagle gold bullion coin sales totaled only 17,000 ounces.

Sales from January through September 2009 comprised strictly 1-ounce coins. Fractional half-ounce, quarter-ounce and tenth-ounce American Eagle gold coins were not sold until December that year. Unprecedented demand for the 1-ounce gold coins led Mint officials to focus production on that coin for much of the year.

In 2010, sales were restricted to 1-ounce gold coins from January through May, with fractionals included in the offerings beginning in June of that year.

2011 and 2012 sales figures include bullion coins struck at both the West Point Mint and San Francisco Mint. The San Francisco Mint resumed production in May 2011 to help meet investment demand after a more than decade hiatus.

The U.S. Mint does not directly sell American Eagle and American Buffalo bullion coins to the public. The Mint sells the bullion coins to a network of authorized purchasers, who acquire the coins from the Mint for the spot price of the precious metal on a given day on the London metals market plus a small premium.

The authorized purchasers may then sell the American Eagle and American Buffalo bullion coins to dealers and the public.

Monthly sales totals, posted cumulatively on a daily basis over the Mint’s website at www.usmint.gov for American Eagle platinum, gold and silver bullion coins and American Buffalo gold bullion coins, may include coins dated from more than one calendar year and do not represent mintages for a particular date. ¦