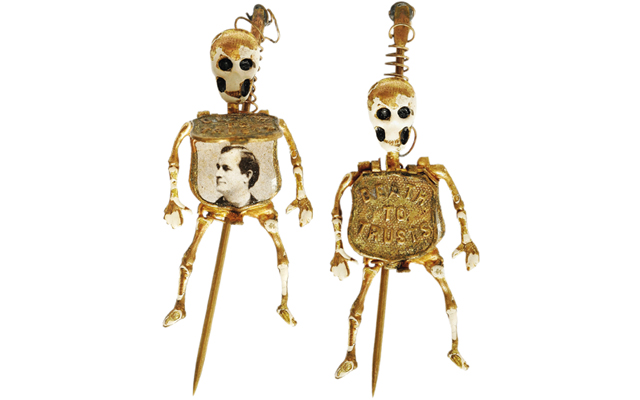 The chest of the skeleton on this “Death to Trusts” William Jennings Bryan mechanical badge pops open to reveal a portrait of the presidential hopeful. 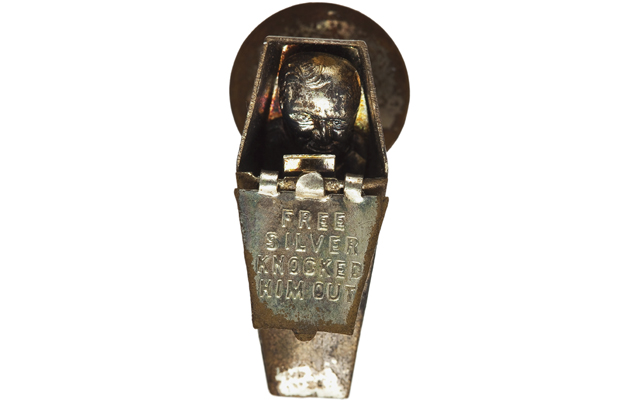 The presidential campaign of 1896 gave rise to several creepy buttons and other collectibles featuring coffins or skeletons, some mechanical, including this one showing Bryan. 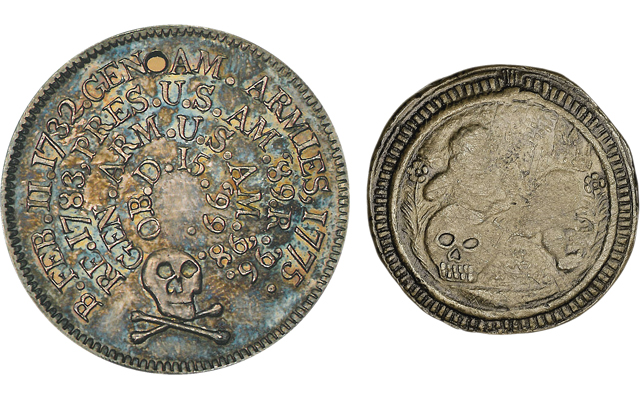 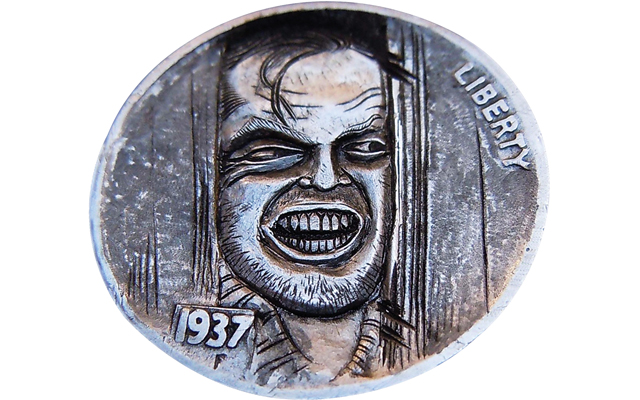 Among Paolo Curcio’s carved hobo nickel creations are Indian Head 5-cent coins whose obverses have been converted into Jack Nicholson’s character from the 1980 movie, The Shining. 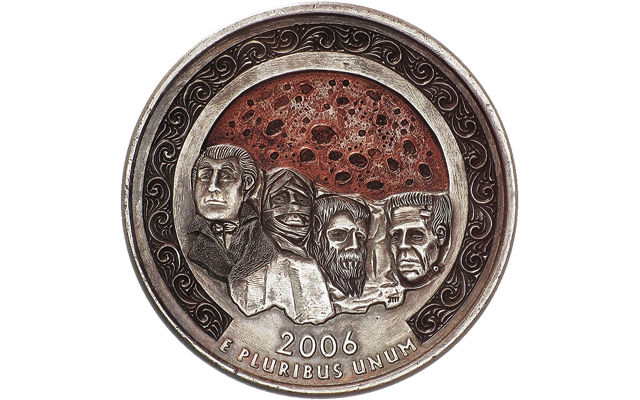 Curcio converted the presidents from Mount Rushmore on the reverse of this 2006 South Dakota quarter dollar into Universal Studios monsters. 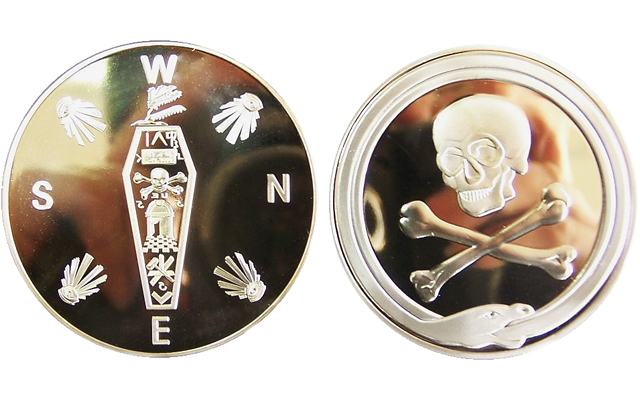 The Skull and Crossbones, also known as the Memento Mori, is among symbols used in Freemasonry as “a grim reminder of our own mortality.”

Images courtesy of shopbags on eBay.

As a child of the 1950s and 1960s in Dix Hills on New York’s Long Island, my television viewing opportunities included such shows — in black and white — as the “creepy and kooky” Addams Family and The Munsters.

While those two shows were comedic in nature, making light of the two mixed families of ghouls, the host of a local television program that featured horror movies often scared the bejeebers out of me more than the horror shows that followed his introduction.

Collectors of the numismatic macabre have a plethora of associated items from which to choose to create a collection bearing devices that are strange, unusual, scary, eerie, spooky and the creepy.

The Dec. 14, 1799, death of the nation’s first president spawned the production of a number of tribute medals to mark his passing.

Among these is the famous Washington Funeral medal with Skull & Crossbones reverse struck in silver and white metal.

Almost all examples known are holed for suspension, as they were worn by mourners during funeral processions in memorial to the late president.

A skull device figures prominently on the reverse of an undated Raleigh’s Plantation token, circa mid-17th century.

The token’s reverse shows a boy reclining, his elbow resting on a skull, with a rose growing at his feet. Behind is shrubbery and a gabled house.

Researchers have wondered whether the token refers to Sir Walter Raleigh’s failed attempt in 1584 to establish a colony on the coast of North Carolina, under patent from Queen Elizabeth I.

One such piece is a 1.5-inch, mechanical skeleton stickpin. The skeleton’s chest, on which the slogan DEATH / TO / TRUSTS appears, is spring loaded and pops open to reveal a portrait of Bryan.

The example illustrated was offered in a June 7, 2008, sale by Heritage Auctions, where it realized $2,629.

The presidential campaign of 1896 gave rise to several creepy buttons and other collectibles featuring coffins or skeletons, some mechanical. Many illustrated the notion that Bryan “talked to death” his opposition. Other mechanical coffins held “corpses” of the defeated candidates inside.

One silvered brass coffin-style stud is 1.125 inches long and features a representation of Bryan within. On the top of the coffin lid is inscribed BILLY BRYAN NOV. 3, ‘96. On the inside of the lid is inscribed FREE / SILVER / KNOCKED / HIM OUT.

Hobo nickel carver Paolo Curcio focuses much of his coin carving on designs of the macabre.

Born in Italy but currently based in Miengo, Cantabria, Spain, Curcio is a graduate in sculpture of the Accademia di Belle Arti di Ravenna and has worked as a jeweler since 2003.

Curcio says he developed his passion for artistic metalworking in 2011, when he discovered the art of hand engraving.

On one Indian Head 5-cent coin, Curcio transformed the obverse portrait of the Indian into a rendition of the maniacal Jack Nicholson from the 1980 movie The Shining, as he delivers his famous line, “Here’s Johnny!”

The obverse of another Indian Head 5-cent coin, one dated 1936, features a crazed killer holding a chainsaw over his head, with a skull to one side.

Frankenstein’s monster walking with his arms extended in front of him is theme for another of Curcio’s artistic creations, fashioned from the bison on an Indian Head 5-cent coin reverse.

Curcio has sold many of his carved pieces via ebay under the seller name mrthe77, as well as through his website, from which he accepts commissions.

Fifty-millimeter commemorative “Memento Mori” medallions, depicting symbolic elements of the Knights Templar and Freemasonry, were found offered on eBay, for $24.99 each. The pieces’ common obverse depicts a skull and crossbones, with a serpent around, devouring its own tail.

The reverse of one of the medallions depicts the Annuit Coeptis design featuring the Eye of Providence that appears on the left side of the back of the $1 Federal Reserve note.

Details of its relevance can be found online.

The reverse of the other Skull and Crossbones medallion features the points of a compass, with North at right, South at left, East at bottom and West at top, around a coffin within which lines a skull and crossbones with other symbols.