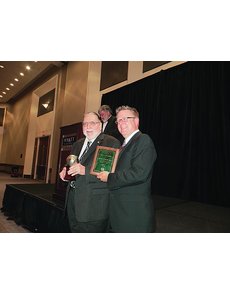 David T. Alexander is presented with the Numismatist of the Year award by American Numismatic Association President Tom Hallenbeck during the ANA World’s Fair of Money banquet Aug. 16.

Longtime numismatist, medals expert and writer David T. Alexander was presented with the Numismatist of the Year Award during the Aug. 16 banquet of the American Numismatic Association World’s Fair of Money held in Rosemont, Ill.

Alexander began collecting coins in 1949, after his family moved to Florida. He and his brother joined the Miami Coin Club in 1953 and became members of Florida United Numismatists in 1955, the year of the organization’s founding.

Alexander began his literary career in 1963, writing for publications of the Society for International Numismatics before serving as a staff writer and editor for Coin World from 1974 to 1981.

A life member of the American Numismatic Association, Alexander previously received the Glenn B. Smedley Award and ANA Medal of Merit. He received the Clemy Award from the Numismatic Literary Guild in 1987 and in 2010 was honored with the Burnett Anderson Memorial Award for Excellence in Numismatic Writing.

Alexander is a 25-year member of the American Numismatic Society and was made a fellow in 2008. He has presented papers at the 1999 and 2005 ANS Conferences on Coinage of the Americas.

Alexander received the 1990 Society for International Numismatics Silver Medal of Merit for Excellence in Writing and Research and Krause Publications’ Numismatic Ambassador Award in 1995.

In 1995, Alexander was elected to the Rittenhouse Society and in 1998 he founded the Medal Collectors of America. He has served as president of the New York Numismatic Club.

The ANS published Alexander’s hard-cover American Art Medals, 1909-1995, Circle of Friends of the Medallion, Society of Medalists in 2011, which received the Professional Numismatists Guild Robert Friedberg Literary Award at the 2011 ANA convention.

During his career Alexander has worked for some of the largest firms in numismatics including Stack’s and its successor entity, Stack’s Bowers Galleries, both in Manhattan, and for Heritage Auctions.

He is currently employed by Harlan J. Berk Ltd.

Other award winners recognized Aug. 13 to 16 are below.

The late Richard Doty was honored with the ANA Lifetime Achievement Award. He was recognized for his long-term contributions to the hobby as an author, researcher and curator.

Doty, who died June 2, 2013, was senior numismatic curator at the Smithsonian Institution’s National Museum of American History in Washington, D.C.

Among his many articles and books, his most recent book, Pictures from a Distant Country, was published in 2013.

Michigan numismatist Raymond W. Dillard was given the Adna G. Wilde Jr. Memorial Award for Excellence. The award is given to ANA members who dedicate their time and resources to further the educational purposes of the ANA and the hobby, and set an example for others.

Dillard, an ANA life member, has been a coin collector for more than 47 years. He purchased his own elongating machine in the early 1980s and began producing designs and elongated coins for festivals, weddings, anniversaries and other occasions. He told ANA officials that he has pressed “more than two million coins and averages one elongated coin series per week.”

Twice a month he visits local middle schools to mentor students in numismatics — which he’s done for the past 15 years.

Bradley S. Karoleff was selected as the recipient of the Harry J. Forman Dealer of the Year Award.

Karoleff, a partner in Coins Plus, a Cincinnati business, was presented the award Aug. 13 at Beyond the Ivy, a rooftop baseball venue located across from Chicago’s historic Wrigley Field, during the World’s Fair of Money Kick-Off event.

The award is presented annually to an ANA-member dealer who shows uncommon dedication to strengthening the hobby and the ANA.

The award is named in honor of the late Harry J. Forman, a Philadelphia coin dealer, author and ANA life member.

Karoleff, who started as a dealer at the age of 16, said his father “always told me if you kept your nose to the grindstone and worked hard that in the end you’d be rewarded, and this is it. Everyday I go to play; I never have to go to work.”

He also writes the “Designs of the Times” column published quarterly in Coin World.

He has also written for ANA’s journal, The Numismatist, and was co-author of the John Reich Collectors Society book Early Quarter Dollars of the United States Mint 1796-1838.

Six individuals were presented with Glenn Smedley Memorial Awards for demonstrating the spirit of the late Smedley, “an ANA member and hobby enthusiast regarded as a ‘collector’s collector,’ ” according to the ANA.

The Freelands are from Michigan and are active volunteers in their home state numismatic groups as well as the ANA.

Among the local clubs that enjoy their support are the Flint Flying Eagle Coin Club, Paper Money Collectors of Michigan and the Michigan Token and Medal Society.

Fuljenz, president of Universal Coin & Bullion Ltd. in Beaumont, Texas, was recognized for his volunteer contributions and financial support of the ANA since the 1980s.

Henry, from Illinois, has served as an ANA volunteer since 1989. He serves as auctioneer for the Young Numismatist Benefit Auction held during the ANA’s Summer Seminar.

Hill worked in the membership department at the ANA headquarters in Colorado Springs, Colo., from 1990 to 2011. She continues to promote the hobby, recruit members and volunteer during the annual Summer Seminar.

Williams is president of the Texas Numismatic Association and was inducted into the TNA Hall of Fame in 2012. In 2005 she was honored with the ANA Outstanding District Delegate Award.

One organization and one individual were presented with Exemplary Service Awards by the ANA. The award recognizes individuals or entities that have performed exemplary service on behalf of the ANA.

He has also won many exhibit awards and served the ANA on its board of governors, among other activities.

Doris Bass and her sons, Michael Calhoun and F. David Calhoun, were also recognized for their exemplary service to the hobby and the ANA.

The Harry W. Bass Jr. Research Foundation in Texas was established in 1991 by the late numismatist and businessman Harry W. Bass Jr., as a way to provide support to the ANA’s educational mission.

Doris serves as president of the Harry W. Bass Jr. Foundation and F. David Calhoun serves as executive director. Together with J. Michael Wylie, Bass and her sons function as foundation trustees.

The foundation is responsible for the Harry W. Bass Jr. Gallery of U.S. gold and pattern coins at the ANA’s Edward C. Rochette Money Museum at ANA headquarters in Colorado Springs, Colo.

ANA life member Larry Gaye was presented with a Medal of Merit Award recognizing his volunteer efforts during more than a dozen years.

He has received the ANA Goodfellow Award and the Glenn Smedley Memorial Award for his volunteer efforts. A lifetime collector, he enjoys Byzantine coins, and British tokens and medals.

Also presented with a Medal of Merit Award was David J. Sklow, also an ANA life member, who serves as the ANA’s historian and secretary.

He has received numerous ANA awards for exhibiting and writing. He’s also served as an exhibit judge and instructor at the Summer Seminars.

MaloneBeach, from Michigan, got hooked on medallic art while involved with high school and college wrestling. Medals won in meets provided tangible evidence of winning memories.

He entered amulets made from fishing lures in an exhibition in conjunction with the 1990 FIDEM Congress (Federation Internationale de la Medaille) in Finland.

District Representative of the Year

He was an ANA-certified judge and an active member of the Texas Numismatic Association. He was the ANA representative for more than 10 years for the Greater Houston Coin Club, where he held every club office.